Abdul Hakim Sani Brown was named as the 2015 IAAF Rising Star of the Year on Thursday (26) after his 100m and 200m victories at the IAAF World Youth Championships Cali 2015 and the 16-year-old Japanese sprint prodigy has now set his sights on a similar feat at next summer’s IAAF World Junior Championships.

“I am very honoured to win the Rising Star Award of this year," said the delighted teenager. "This award has been given to top athletes, and I can't believe I won it.

“I would like to thank to everyone who selected me for such an amazing award. Also I can't thank enough my families, teachers and others who have been supporting me to come this far.

“I believe I was selected from the results of the World Youths in Cali, where I broke the 200m championship record held by Usain Bolt; and I won both the 100m and 200m.

“I'm not sure where the World Juniors will be next year, but I'm definitely aiming to double up and hopefully I can make a final at the Olympics.

“I will consider this year as a milestone, and I will train hard every day and do my best while trying to remain humble," he added. "My biggest goal is winning a medal in Tokyo 2020 (Olympic Games) and getting a world record."

Beating Bolt’s 200m championship record will probably be considered to be the apogee in a breakthrough year which grabbed the attention of athletics fans around the world.

"Before the season started, we discussed his goals for 2015," said his coach, former 400m runner and Olympian Takahiko Yamamura.

Sani Brown’s initial goals for 2015 included simply making the team for Cali and qualifying for the Japanese Championships but they were quickly surpassed.

His journey started at the Shizuoka International Track Meet in May where he ran what was then a personal best of 20.73.

He earned second place in both the 100m and 200m, improving to 20.57 in the longer sprint, at the Japanese Championships in June, despite windy and cold conditions.

In July, he then travelled close to 24 hours from Japan to Colombia to participate at the World Youths held in Cali, where he notched up a pair of championship records with 10.28 and 20.34.

"To win both events was my goal," he said. "I set two meeting records, and I'm pretty happy with the overall results."

Winning the 200m in Cali with 20.34 also gave him the standard for the IAAF World Championships in Beijing.

"My coach told me before the final (in Cali), if I'm comfortable I should try to push hard to make the standard for Beijing."

On 29 August, Sani Brown made his debut at a senior international championship.

Running out of lane nine, Yamamura told him: “Just focus on your move. If you repeat the same performance from the finals at the World Youths, you will make the semi-final.”

He did just that. Sani Brown quickly got out of his blocks and held his form to finish second in his first-round heat. “Though it wasn't a perfect race, I'm very happy to make the semi-final.”

However, the semi-final on the following day ended up being a bitter-sweet experience for Sani Brown, who was the youngest competitor ever in a World Championships men's 200m.

Once again he was assigned lane nine, but this time ran out of steam. Sani Brown tried his best, but was a bit stiff and was unable to accelerate on the curve and finished fifth.

“I heard the sound of (Justin) Gatlin's footfalls in lane seven and while I was expecting to be caught by him, I did not think it would happen at such an early stage of the race,” he added, with a modicum of disappointment.

“Mentally I was very tired and maybe the pressure finally caught up with me."

Nevertheless, it was a good initiation for the youngster, learning about the intense atmosphere in the warm-up area, sharing accommodation with senior athletes, and even practising for the 4x100m relay.

Rio on the horizon

Sani Brown currently attends Josai High School in the heart of Tokyo and, not surprisingly, space is at a premium. The track and field team has a daily training session on a tennis court or in the streets around a school because they don't own a track.

For a sprint session, they travel to a public track or a nearby university track, like nomadic athletes.

However, despite the fact that his environment is far from perfect, his coach Yamamura designs unique programmes for them.

During the winter, they do lots of basic core training which Sani Brown admits he doesn't enjoy much.

“Hakim doesn't listen to me during training sessions, but he listens before races and delivers well," said Yamamura.

“I think I do listen to you, coach,” responded Sani Brown, slightly alarmed.

Yamamura won the 1997 national 400m title at the age of just 17 and is a passionate and well-spoken person. He thinks Sani Brown's growth curve is unpredictable but that the sprinter has the tools and potential to not only take the title in the Japanese Olympic Trials 200m next year, but also have a long and successful career.

In the short term though, there is the IAAF World Junior Championships to consider.

No other athlete, of either gender, has managed to follow a World Youth sprint double with a similar brace in the junior age category the following year.

If Sani Brown achieves that, he will enter the history books once more.

BACK
Pages related to this articleAthletes
Abdul Hakim SANI BROWN 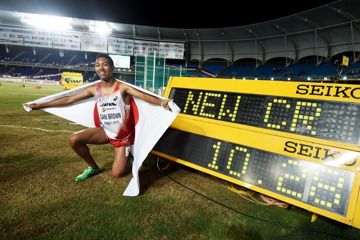 Sani Brown provides the highlights of the ope... 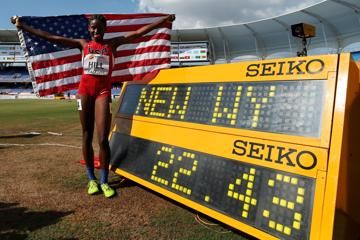