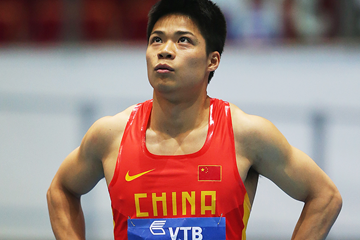 When Su Bingtian was first added to his junior high school’s track and field team, he rarely trained or competed. Primarily, he carried bags for his senior team-mates and watched them run.

Nobody at that time, including Su, believed that the small boy could one day become the fastest man in the world’s most populous country.

Born in a rural area in China’s south-eastern province of Guangdong, Su started to train in athletics in 2003. After most of his senior team-mates graduated, Su got more opportunities to compete and gradually proved his potential with his great explosive and elastic strength.

“When I started to compete for my school in junior three, I achieved quite good results, breaking a series of school records,” said Su.

In 2004 he was selected into the sports school in the city of Zhongshan and two years later he was promoted to the provincial team, where he met his current coach Yuan Guoqiang.

“When I first saw Su, I thought he was a diamond in the rough,” said Yuan. “It would be bragging to say I knew he would break the 10-second barrier one day. But I did see his potential to develop to a top runner in China and maybe cut a figure on the continental stage.

“He had a good rhythm and was already a double silver medallist in the 100m and 200m at the provincial sports meets although he was still a junior sprinter, with a 100m personal best of 10.59.”

Yuan set China’s first national record in the digital timing era, running 10.61 back in 1978 before improving to 10.52. What Su can learn from him is not only running technique but also the determination to become a champion.

“Yuan is a very experienced coach, one of the best in the country,” said Su. “I have learned a lot from him and most importantly I am really pleased to train with a coach who is also a fellow townsman.”

Hailing from Guangdong as well, Yuan can speak Cantonese, a dialect Su tends to use when communicating with his family and local peers.

In 2009 Su established himself as an elite sprinter in Asia, winning a total of 11 national and international races over 60m, 100m and the 4x100m.

From national titles to national records

The first big highlight of Su’s career came in 2011 when he clocked 10.16 to win at the National Championships, breaking the national record of 10.17 which had stood for 13 years.

After that, Su continued to make history.

More recently, on 30 May this year, Su sprinted to a national record of 9.99 to become the first Chinese athlete to dip under the 10-second barrier, finishing third at the IAAF Diamond League meeting in Eugene.

“9.99 is like a landmark for China,” said Su. “As a Chinese person, I feel so proud to make history like this. But I am not going to be complacent with this result, I still have a long way to go and need to keep working hard in the future.”

In the eyes of Yuan, Su’s breakthrough came after years of hard work.

“Su is the kind of athlete who, once he has set himself a goal, he will devote himself entirely to achieve it,” said Yuan.

“He improved his PB to 10.06 at the IAAF World Challenge meeting in Beijing in 2013. Since then, he had set his goal to run under 10 seconds. And Zhang Peimeng’s 10.00 national record set at the World Championships in Moscow has given him more courage; it convinced him even more that a sub-10 clocking was not an impossible mission for Chinese athletes.”

Two years ago in Moscow, Zhang missed out on the 100m final by mere thousandths of a second. Su, meanwhile, was disqualified from his semi-final for a false start.

“When Su first began to train in sprinting, he had been using his right foot to start,” he said. “But he always found his third step a little bit weak and unsteady which would affect his intermediate running and the whole rhythm. So last winter, he has changed his way of starting with his left foot going forward first.”

Su has inherited good sports genes from his family. Among his 11 cousins, six of them are retired track and field athletes. But his height of 1.72m is arguably a disadvantage for a sprinter.

“But longer strides could also lead to lower frequency,” added Yuan. “That is a tricky problem; we are still trying to find the best balance for him.”

“No matter what, if he can consistently run faster than 10.10, I think he will make further improvement.”