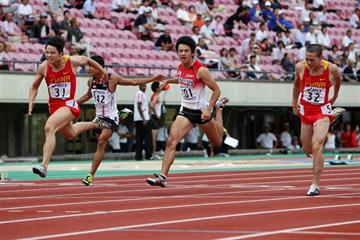 Kobe, Japan - The Japanese had never won the men’s sprint title in the Asian Championships in its 38-year-old history. Friday could have changed that, or at least that is what the few thousand spectators who turned up at the Kobe Universiade Stadium would have looked forward to.

The talking point, instead, was a controversy about a false start in the 100m which Chinese Su Bingtian won in 10.21.

Masashi Eriguchi, the Japanese No. 2 this season, but the home favourite, was the athlete who was charged with that false start. The red flag was up for him and as he came off the second start and sank to his knees there was anxiety. Officials huddled together to review replays. There was a 10-minute hold-up and the runners were asked to wait. Eriguchi was re-instated, and he made a determined effort to win, but came second.

The Japanese technical officials tried to explain at the end of the day’s programme that the starter had heard the false-start beep, recalled the runners, viewed the reaction timings and found not just Eriguchi but three other runners were below the limit.

According to the final explanation, the officials decided that the equipment might have malfunctioned, and the best way out was to put Eriguchi back in the race. It sounded complicated, especially with interpreters trying to figure out technical jargon, but the technical officials were grilled for quite some time by the Japanese media.

Twenty-one-year-old Su Bingtian clocked a personal best; more importantly he led the Asian season lists, displacing Japanese Yusuke Kotani (10.28), who had topped until now. Kotani was seventh in 10.39. Another sprinter who had done exceedingly well this season, Oman’s Barakat Al-Harthi was sixth in 10.38.

The women’s sprint title went to Uzbek veteran Guzel Khubbieva. Come to think of it, this was her first Asian championship title. And it came in a modest, though season best 11.39. The 35-year-old, off to the best start (reaction 0.121) put daylight between her and the rest by the half-way stage and finished about three metres ahead of second-placed Wei Yongli of China who timed 11.70.

There were several firsts today, most notably a silver for an Iraqi woman in the 400m, that country’s first medal in the women’s section. Ieso Gulustan Mahmoud, stockily built, was strong at the finish in the one-lapper, coming behind Kazakh Olga Tereshkova who timed an Asian season-leading 52.37. Mahmoud’s silver came in a national record 52.80, bettering her own mark of 53.44 clocked last year.

The UAE fielded its first woman athlete in the Asian meet. Betlhem Desalegn Blayneh came fifth in the 1500m where she was expected to do better. Bahrain’s Genzeb Shumi Regasa won in 4:15.81.

Ali Abubaker Kamal of Qatar took the 3000m Steeplechase in a season best 8:30.23. Artem Kossinov of Kazakhstan surprised experienced Tarek Mubarak Taher of Bahrain for the silver. Taher was running in his first race of the season.

The men’s Pole Vault competition, postponed the previous day because of inclement weather, saw Japanese Daichi Sawano living up to his ranking while winning the title. But his 5.50m was well below par for someone who had reached 5.62m this season. Rains did not upset the schedule on Friday.

The men’s 1500m saw yet another disappointment for Bilal Mansoor Ali of Bahrain. He was the top-ranked man at the Asian Games last year, but could not kick hard enough to beat the rest. He was in front up to the last 200 metres, but from there Kuwaiti Mohammad Al-Azemi took over. Eventually, Mansoor had to settle for fifth place.

Iranian Morad Sajadi, the double gold winner in the last Asian Games, tried to outkick Al-Azemi on the straight, but the Kuwaiti had the reserves to tackle Moradi’s late surge.

Evgeniy Ektov of Kazakhstan dashed the hopes of Chinese Li Yanxi with a jump of 16.91m in the Triple Jump. The Chinese could manage only 16.70m, while another Kazakh, Roman Valiyev claimed the bronze in 16.62m.

Hadi Sepehzrad at last has an Asian title in the Decathlon. The towering Iranian was only 13 points ahead of Indian Bharat Inder Singh, going into the 1500m. Both were poor runners and Japanese Akhiko Nakamura took advantage to make up a gap of 266 points to claim the silver.

Singh who strained a hamstring in the 110m Hurdles, was sad that he had such below-par marks for the second day. But he was happy that he had an Asian medal.

by An IAAF correspondent