In South Africa, 2015 will be remembered as ‘The Year of the Sprinter’.

It is hard to remember when the national records kept tumbling at such regular intervals as they did during 2015 but the South African 100m, 200m and 400m records were all bettered more than once during the season.

When he won the 100m at the recent Commonwealth Youth Games in Samoa in a time of 10.20, 17-year-old Tlotliso Leotlela showed he is waiting in the wings to challenge his more senior rivals.

The TuksSport High School student – who often goes by his middle name Gift –  was just 0.01 away from the world youth best of 10.19 run by Japan’s Yoshihide Kiryu in 2012.

However, to get Leotlela to talk about his fleet-footed exploits is a tough challenge. He strictly adheres to the advice once given to him by van Niekerk.

“Be humble. Never allow success to go to your head, because you never know what will happen in your next race,” was what Van Niekerk told the youngster.

“I specially look up to Wayde.  We are both from the Free State so, apart from being sprinters, we have something else in common,” commented Leotlela.

“Wayde’s performance in the 400 final at the World Championships was goose bump stuff. I was quite emotional afterwards because I knew how hard he had worked for that one perfect moment.”

As far as his own heroics are concerned, Leotlela readily admits that he surprised even himself in Samoa.

“If you had asked me before the race if I expected to run such a fast time I would certainly have said no. My preparation leading up to the Games was far from ideal.

“Because of injury problems I was unable to do the hard work that needed to be done. To top it all, I suffered from a bad case of diarrhoea the weekend before my race.  I definitely had no great expectations of my chances and considered my participation in the race as a matter of survival.

“Luckily I became stronger and stronger after every race. I won my first heat in 10.50 something and in the semi-finals my time was 10.47.

“Going into the final my only goal was to run to the best of my ability, hoping that it would be good enough to ensure a victory.

“After the final, things were slightly confusing because I saw my time was again 10.47. After a few minutes I was told that I had actually run 10.20.  This news caused a bit of an adrenaline rush, but it was only after I had heard that the wind reading was OK that I really appreciated what I had achieved. It was just unbelievable.”

Leotlela now has the 2016 IAAF World Junior Championships, to be held in the Russia city of Kazan next July, in his sights.

“But first I have to qualify. I am slightly nervous about it because I know my training partners at Tuks (University of Pretoria) will do their utmost to beat me. Perhaps the competition is good for all of us.  If we are able to push each other to our limits during training it will be easier when we race internationally.”

According to Leotlela, athletics has always been his favourite sport.

“At the Sentinel Primary School in Qwa-Qwa I played a bit of football.  Because I was so fast I played striker. I guess if it had not been for my love for athletics I would have continued playing football.  Like with most other African boys, the game is in my blood.”

Leotlela’s official coaching only began at the age of 14 when he went to HTS Louis Botha in Bloemfontein.

“I received a bursary to attend the school and was coached by Mr Kobus Hendriks, the headmaster. My first big success came in 2013 when I won the SA Schools 200m for sub-youth boys (age 15) and came second at the SA sub-youth championships at Pilditch. Kyle Appel (2015 IAAF World Youth Championships 200m silver medallist) just beat me on the line.

"This was probably my first breakthrough; although I came second, it made me realize that I was able to compete with the best.”

Leotlela considers himself as a sprinter with a good start, who is able to keep his top speed until the end in the 100 metres.

“In the 200 metres I still battle to keep my top speed right up to the finish, but we will get there,” he joked.

His mother has been Sarah instrumental in keeping his feet on the ground.

“She raised us as a single parent and, although times were not always easy, she never once complained. She is the one who taught me the importance of perseverance. If there is one person I never want to disappoint it is my mom. It’s something that drives me.

Leotlela’s coach Hennie Kriel now has the important job of making sure that the gifted teenager doesn’t fall by the wayside like so many other athletes who taste success at a young age.

“A study of the all-time list of the fastest youth (under 18) sprinters does not make for good reading. Most of the athletes never had any impact as senior sprinters. They disappeared from the scene without ever fulfilling their potential.

“The main challenge will be to give Gift the proper guidance and support to help him bridge the gap between excelling at junior level, followed by being equally successful at senior level,” said Kriel.

Kriel said what excites him about Leotlela as an athlete is his focus on success.

“At times it can be quite challenging to coach Gift.  He always wants to know what he can do to run that little bit faster.”

“Much will depend on how motivated and hungry for success Gift is. It is important that he should realize that he is bound to suffer setbacks. It will be his ability to bounce back from these disappointments that will determine whether he has what it takes to become a true champion in a few years from now.”

Wilhelm De Swardt for the IAAF 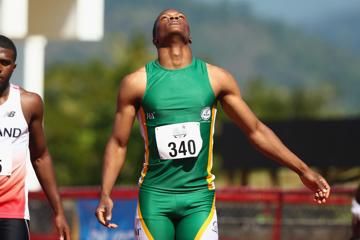