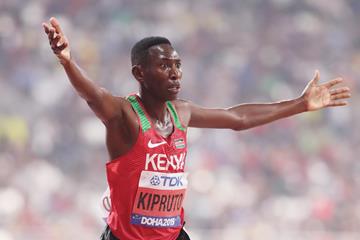 Against all odds, Kipruto claims his most treasured gold

If you build it, the fitness will come. At a time of crisis, that’s what Conseslus Kipruto had to tell himself.

It was late April, 2019, and the reigning world and Olympic steeplechase champion was in the doldrums, nursing a stress reaction in the talus bone in his foot. Due to its location and lack of blood flow, it’s an injury that is fiendishly difficult to heal.

There were just five months until the IAAF World Athletics Championships Doha 2019, and the 24-year-old was told by his doctor he would need to take two-and-a-half months off running.

“I had a lot of stress, a lot of worries,” says Kipruto. “What am I going to do until I make it to Worlds? What will I do when I’m in recovery?”

His solution was testament to a champion’s ability to innovate. He built a pool in his back yard.

Not a large pool, or a particularly attractive pool: it was five metres long, about two metres wide, and wedged into a small space at the back of his residence in Mosoriot, filled with water that was as cloudy as apple juice.

His training partners lent a hand, all of them keen to see Kipruto arrive in Doha ready to defend his title.

Some concessions had to be made. He filled the pool with water normally used for growing vegetables, for sanitation and for supplying the cows that were kept on the local land. Some of those close to him watched the project unfold and thought he was crazy, but Kipruto never lost sight of the end goal.

“I said, ‘let me build this pool, let me do [underwater] running and that can make my legs feel strong when I start training. It will not be like beginning’.”

And in he would get, three or four times a day, looping a donut-shaped ring around himself to stay afloat and aqua-jogging back and forth, back and forth, hour after monotonous hour.

“I put all my effort for the day into the pool,” he says. “When I put it all together, I was doing like five hours a day.”

He started running on dry land again in the middle of June and swiftly felt the payoff. “I texted Michel [Boeting, Kipruto’s manager] when I did the first runs and told him, ‘that swimming pool helped me a lot’.”

As he began to rebuild his mileage, the only race he had to concern himself with was the one against the clock. The Paris Diamond League meeting in late August was circled for his comeback, and in training Kipruto focused primarily on endurance.

That race gave him a harsh lesson in the distance he needed to bridge, Kipruto coming home fifth in 8:13.75 as Soufiane El Bakkali took victory in 8:06.64. Two days later he tried again at the African Games in Rabat, but with his legs yet to recover from Paris he ended up stepping off the track.

“When I ran in Paris I said to my coach, ‘I don’t have the power’. He told me to relax, that I had to cancel the last Diamond League and I said, ‘coach, I have to do it’.”

Kipruto wanted one more shot at the world’s best to know where he stood, but in Brussels he again found himself fading out of contention on the final lap, finishing seventh in 8:14.54 with Getnet Wale winning in 8:06.92. He had eight seconds to find on the world’s best, and just four weeks to find them.

Kipruto returned to Kenya a little despondent but it was then that his coach, Japter Keter, changed the focus of his training.

“We did speed work like four times a week for two weeks,” says Kipruto, who soon felt the old pop return to his legs. “After those two weeks he wished me good luck and said, ‘Conseslus, you’re going to win the title’.”

He heard all the talk in the Kenyan media on the build-up, the concern about who would step up for the proud steeplechasing nation with the defending champion lacking form. “After the injuries, people started to say [Kenya] had to depend on [Benjamin] Kigen or other young Kenyans. For me, I didn’t want to put myself in that pressure. I told people, I’m not going to bring that pressure because if you do that you’re going to lose your mind.”

His solution? “I keep training – that’s how to handle things.”

In his semi-final, Kipruto coasted to the front and the diminutive distance runner looked every inch the alpha male of his event, waving at teammate Kigen to slow down on the final lap. “I was telling him: ‘don’t use the energy, we are going to use it in the finals’.”

He didn’t want – or expect – a fast race in the final, Kipruto confident in his speed but not in his ability if the pace was hard from the gun. “I thought we were going to win in 8:08, but I thought: ‘what about these Ethiopians?’ If they want to push to run 8:05 I say, ‘I’m going to lose’.”

But when that’s what unfolded in the race, Kipruto was struck by another thought. “I said: ‘no, I’m the defending champion, I want to take the victory. This is a Kenyan event’. I said, ‘I’m going to retain my title, to take this victory to Kenya’.”

The Ethiopians teamed up to keep the pace more than honest, Chala Beyo taking out the first two laps before Wale took over and reached 1000m in 2:39.55. Their teenage teammate Lamecha Girma led through 2000m in 5:22.95, and at that point Kipruto was sitting in, trying his best to focus on the task as he heard his name roared countless times from the hordes of Kenyans in the stands.

“It was an amazing crowd,” he says. “I was like, ‘I’m in a competition, I should focus on this,’ but that made me fight, especially in the last 50 metres.”

And how he had to fight.

Going down the back straight for the final time, Kipruto was tracking chief rival El Bakkali, confident he had enough in his legs to have him covered, but then sling-shotting from behind came Girma. Kipruto stayed calm as he saw the Ethiopian go for home and enacted Plan B.

“I planned to jump the last barrier with him but I made some mistakes,” he says. “I was a couple of metres [behind] so I thought I was going to lose it. I didn’t want to be a former world champion so I had a great and strong mentality in my head and in my heart. I said, ‘I want to take the victory’.”

What unfolded was the most thrilling – and closest – finish of the championships, Kipruto reeling in Girma with every stride and the pair crossing it virtually in unison. Then there was a pause, the most painful 28 seconds of his life, as he waited for the verdict.

“I was praying: let it be me,” Kipruto recalls. “Let the first name be Conseslus.”

He immediately climbed on the barrier after the finish, then sat back on it and looked up into the stands, looping his fingers in a circle around his eye – a message to those who doubted him.

In his all-conquering career, there had been wins of sheer dominance: his Olympic title in 2016, his first world title in 2017. There had been wins despite wretched luck: his 2018 Diamond League final win in Zurich, where he had run down El Bakkali to win by 0.04 despite losing a shoe early in the race.

Never had he won, however, amid such outrageous odds. Three months earlier he couldn’t walk, but here he was, back on top, running and jumping and sprinting his way into the annals of the all-time steeplechasing greats.

A journey that began underwater had finished on top of the world.

“I win a lot of gold medals,” says Kipruto. “But this one was something special.”