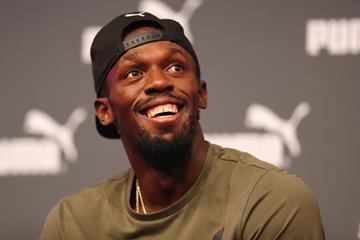 Speaking at his final pre-championships press conference, at a venue visited by King George III of Great Britain back in 1787, Usain Bolt had precious few words of encouragement for any pretenders to his particular throne.

Asked what legacy he wanted to leave come Sunday morning, the day after the men’s 100m final at the IAAF World Championships London 2017, the Jamaican king of the sprint world spelled out the headline for the assembled journalists from around the globe.

“Unbeatable!” he told his audience at The Brewery in east London. “Usain Bolt has retired unbeatable over the individual events.

“Relays you never know, but for me that will be the headline, hopefully: Unbeatable! Unstoppable! Alright guys, jot it down…”

The world’s fastest man might be short on form heading into the final challenge of his long, distinguished Fort Knox of a gold-gathering career – just the three 100m races in 2017 and just the one sub-10-second clocking (9.95 at the IAAF Diamond League meeting in Monaco on 21 July) – but he has no lack of self-assurance.

Asked whether he was truly confident of finishing with a fourth IAAF World Championships 100m gold medal to match the quartet he has already collected from his beloved 200m, Bolt seemed almost exasperated that anyone should doubt his ability to come good after another less-than-perfect build up.

The history books, of course, support such unshakeable assurance. In eight individual finals at the past four IAAF World Championships (and in four 4x100m relay finals too), Bolt has only been beaten by himself: when he false started in the 100m final in Daegu in 2011.

A Jamaican journalist merely mooted the possibility of something similar happening in London – enquiring whether the great man would change his plan and contest the 200m if he happened to lose the 100m – and the Lightning Bolt was quick to strike down the prospect.

With the help of his trusty support team, not least his "genius" of a coach, Glen Mills, Bolt has clearly got himself into a suitable frame of mind to sprint off into the sunset by extending his record haul of 11 IAAF World Championships gold medals.

That psychological state, however, includes the motivation of having a point to prove: to those who still doubt whether he has one more Midas touch left in his locker, two including the 4x100m relay.

“I’m the underdog, for some reason,” the 30-year-old said. “That’s what I keep reading. That’s what my team keeps telling me… I’ve got to prove myself once more.

“My last race was 9.95, which shows I’m going in the right direction. The two rounds [heats and semis] always helps me. I’m always going forward.

“At championships it’s about who keeps their nerve. I’ve been here before. It’s time to go. It’s ‘go’ time.”

Bolt has made a habit of overcoming injury and lack of form coming into global championships. He has done so for four in a row now.

This time, though, there has been tragedy with which to contend. It was only on 20 April that Bolt lost one of his closest friends, Germaine Mason.

The pair were teammates when the IAAF World Junior Championships came to their home country in 2002. Bolt won the 200m as a spindly 15-year-old, sending an already raucous crowd in the National Stadium in Kingston into a state of delirium. Mason won a bronze medal in the high jump, before switching allegiance to the land of his British father and earning Olympic silver in Beijing in 2008.

He was just 34 when he lost his life in a motorbike accident. Bolt was a pallbearer at the funeral.

“For me, it was a rough time,” Bolt reflected. “I’ve never had somebody passed away that close to me before.

“It set me back a little bit. I didn’t train for three weeks. My coach gave me my space. He gave me time to grieve.

“At some time, the close net of people I was with said, ‘We know it’s hard, but you need to get back training because Germaine was looking forward to coming to your last race to see you compete and finish off your legacy.’

“That definitely helped me to get back, to get going again. It was hard but it became a positive and now I really want to do it for him and for his family, and all the friends around who supported me in a hard time.”

As he approaches the end of his trailblazing career, the triple Olympic 100m and 200m champion looks back on that victory on home soil at the 2002 IAAF World Junior Championships as his proudest moment.

“For me, to win in front of my home crowd…there has been no better feeling,” said Bolt. “That is the most proud I have ever been.”

As for his best ever performance, Bolt plumped for the 200m final at the 2008 Olympics in Beijing, when he flew halfway round the Bird’s Nest track in 19.30, breaking Michael Johnson’s world record by 0.02.

What lies ahead for Bolt, beyond the final finish line, remains unclear.

There were farewell messages from the great and the good on the press conference screen at The Brewery – notably from Song Tao, the Chinese television cameraman who accidentally floored him after his 200m triumph at the 2015 World Championships in Beijing (“Don’t worry; I won’t be in London”), and from the Hollywood’s king of cool Samuel L Jackson (“Thanks for all the thrills; thanks for all the chills.”)

Perhaps it was the kind words of the latter that prompted the impish Bolt to suggest that, as well as pursuing a football career with his beloved Manchester United (“I’m waiting for a call from [Jose] Mourinho”), he might consider the silver screen too. “I might go into acting and do some action movies,” he said. “You never know.”

One avenue Bolt is keen to pursue is that of a global ambassador for track and field.

“One thing I’d like to do is travel around and try to inspire young kids and also coaches,” he said. “I’d like to inspire people as much as possible – to explain to them what I’ve been through in my career and try to help to motivate them.

“If I could do that, it would be good: go to all the corners of the world and try to motivate other people to get into the sport.”

As the years tick by, and track and field looks to build on the Lightning Bolt effect, might there be a day in his lifetime when the stunning world records he set at the 2009 IAAF World Championships in Berlin (9.58 for 100m, 19.19 for 200m) be eclipsed?

“I hope not,” the fastest man in history pondered. “I think no athletes would wish their world record would ever be broken in their lifetime.