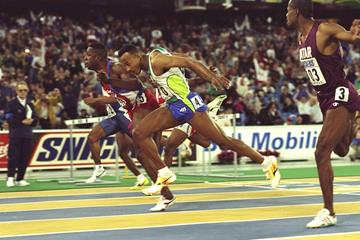 The 60m medallists from the 1993 IAAF World Indoor Championships were honoured during a commemorative reunion hosted by the Qatar Athletics Federation in Doha on Sunday (11).

“Sport is about what brings people together,” said Dahlan. “It is great that we have all three medallists from 1993 here with us. We need to think always about athletes from the past and to welcome them into our present family.”

It was a particularly moving moment for Mansour, the first sprinter from Qatar to win a global medal in athletics.

“This is a very emotional moment for me,” said Mansour. “I’m very grateful for this initiative.”

Standing with his 14-year-old son Esmail at his side when he accepted the trophy, Mansour added: “Thank you so very much for remembering me. I’m very happy to have brought my son here to witness this historic moment.”

Surin, who won the gold medal at the 1993 edition of the championships in front of his home crowd in Toronto, was delighted to be part of the reunion.

“Thanks so much for thinking about the past,” he said. “I’m grateful to be here and I wish the best and brightest future to all athletes in Qatar.”

Fredericks, the silver medallist in the race, was equally delighted to revisit and relive the moment with Surin and Mansour.

“It’s a great honour to be here, especially with Talal who was the flag bearer for Qatari athletics,” said Fredericks, who later that year triumphed over 200m at the IAAF World Championships outdoors. “It was an honour to compete with these two gentlemen. It was honest, it was true.”

“I’m delighted to share this special lunch on the occasion of the Doha IAAF Diamond League 2014 with our hosts and friends from the organising committee,” said Diack. “Today we mark the achievement of three distinguished athletes and medallists from 1993, especially Talal Mansour who won a memorable medal for Qatar.”

The ceremony took place in the company of 30 special guests at the Mamig Restaurant in Doha’s seaside Katara area. Following the lunch ceremony, Surin and Fredericks met with representatives of the Qatar Olympic & Sports Museum to whom they donated and loaned items for exhibit. They also shared more memories of their 1993 race.

“It was a great moment for me, winning at home,” said Surin, who successfully defended his title two years later and then went on to win Olympic gold in the 4x100m relay in 1996. “It was a great competition with Frankie and Talal. I remember it very well.”

Surin also spoke about returning to Doha for the first time in 17 years.  “It’s amazing to see how the city has changed, expanded and grown,” he said.

For Fredericks too, the 1993 race holds a special place in his heart.

“I was very happy, coming from apartheid and winning my first medal in a world competition, for me and for my country.”

Surin edged Fredericks by a scant one one-hundredth of a second. Fredericks, who accelerated later in the race, said he lost the gold at the start.