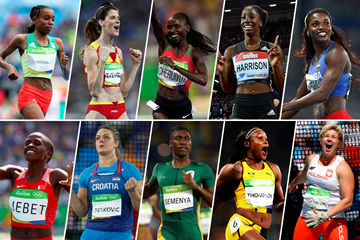 With the selection process to choose the 2016 World Athletes of the Year now underway, here’s a closer look at this year’s 10 women’s nominees who were selected by an international panel of athletics experts, comprising representatives from all six continental areas of the IAAF.

The winner will be announced at the IAAF Athletics Awards 2016 in Monaco on Friday 2 December.

Kendra Harrison (USA) 100m hurdles
Breaker of a 28-year-old world record with 12.20 and Diamond Race winner. Winner of 10 out of 11 finals outdoors. Produced eight of the year’s nine fastest performances.

The voting procedure for the 2016 World Athletes of the Year:

The IAAF Council and the IAAF Family* will cast their votes by email, while fans can vote online via the IAAF's social media platforms. Individual graphics for each nominee will be posted on Facebook and Twitter later this week; a 'like' or 'favourite' will count as one vote.

Voting closes on 1 November. At the conclusion of the voting process, three men and three women finalists will be announced by the IAAF.

The male and female World Athletes of the Year will be announced live on stage at the IAAF Athletics Awards 2016.