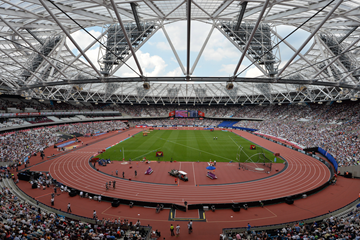 With its founding principles based on achieving “a sound mind in a sound body” ASICS believe the IAAF World Championships London 2017, which open on 4 August, provide the perfect fit for the global sportswear giant and Official Partner of the IAAF World Athletics Series.

After ASICS committed to a multiple-year partnership with the IAAF last year, the 16th edition of the biennial event represents the company’s first such involvement at a World Championships.

Taking on a multi-faceted role which includes everything from kitting out the many volunteers, who ensure the smooth running of the championships, to providing the kit for half-a-dozen key nations, Asics will be at the heart of the sport’s flagship ten-day event, which is expected to be watched by billions around the world.

ASICS – an acronym for the Latin phrase “anima sana in corpore sano” translated as ‘a sound mind in a sound body’ – have also launched a multi-year brand campaign around London, designed to encourage more people to be more physically active and to enjoy the benefits of embracing an active lifestyle.

Research by ASICS has recently revealed that Londoners’ daily commute on the underground can make them feel twice as tired and three times more stressed than those that walk their commute.

Some 92 per cent of those who do physical activity also believe it improves their mood, but the problem is that most of us struggle to fit it in, with almost three-quarters of Brits (73%) saying the reason they don’t move more is because they don’t have the time.

In response to this, ASICS has partnered with the IAAF World Championships London 2017 to launch #IMoveLondon, a campaign to help inspire Londoners to trade the misery of the daily commute for the benefits of getting outside and moving more.

ASICS has created a video series with the SMSB (Sound Mind Sound Body), which shows how people can turn their city into a gym by illustrating the amazing locations where Londoners can get active. The SMSB is a global community of creative and sports enthusiasts founded by ASICS and curated by DJ and poet Charlie Dark, who are leading workshops at a series of pop up events hosted by ASICS around the capital.

Run the Tube is a multisensory movement experience, which creates an 85-metre tunnel made from hoops of light that respond to the music being played. Designed by American artists Rob Jensen and Warren Trezevan, Run the Tube will take up residence at three locations – the Leake Street Tunnel, Queen Elizabeth Olympic Park and Clapham Common -- from August 3-10.

IAAF President Seb Coe said: “With the IAAF World Championships coming to London, it’s more important than ever to get the host city moving more. We’re extremely excited to work with ASICS on a campaign that will encourage Londoners to positively disrupt their everyday with exercise – even long after the Championships have finished.”

Paul Miles, Senior General Manager, Global Marketing Division ASICS Corporation, said: “ASICS knows that movement helps get the most out of life – helping you to feel good in your mind and body. We also know how tough it can be to find the time to get the benefit of exercise into our increasingly busy lives. We’re all inspired by the amazing athletes taking part in the IAAF World Championships in London this summer. With #IMoveLondon we want to spread that inspiration by helping Londoners swap the time they’ll normally be commuting to enjoy the benefits of exercise by getting active in their exceptional city.”

ASICS will also be involved in a number of other significant activations in their association with the IAAF World Championships. They’ll open their Out of Home execution on July 31 and include domination at Oxford Circus and Stratford tube stations, as well as the Westfield Shopping Centre (near the London Stadium) – a presence in more than 15 key tube stations around the British capital and a massive outdoor banner at the iconic Piccadilly Circus. It’s a total plan which is excepted to deliver well in excess of 51m impacts.

The sportswear giant also plans to open its flagship store - its biggest worldwide – on Regent Street in central London on August 2 as it seeks to further its growing presence in the UK.

At the heart of the IAAF World Championships London 2017

ASICS will also have a very distinctive on-track presence inside the cavernous Olympic Stadium with their sponsorship of six national federations; Italy, France, Japan, Korea, Netherlands and Morocco – which between them won seven medals at the 2015 IAAF World Championships and in London will be hoping for more continued success.

As an innovative company committed to designs that inspire athletes to perform at their best and unlock their potential Asics branded athletes in London – which include Olympic 200m bronze medallist Christophe Lemaitre of France, America’s rising 8.58m long jump talent Jarrion Lawson - will compete in the hi-tec HL_0 Sprint Suit, designed with rigid and high stretch materials to eliminate restrictions on the wearer’s motions without energy loss.

Meanwhile, in a smart design concept the triangle motif of ASICS’ IAAF delegation uniforms capture the same geometric patterns seen at the 2012 Olympic host stadium, venue of the IAAF World Championships in London.

Without question ASICS will be genuinely at the heart of the sport’s marquee event and it is an opportunity they are relishing.

Miles concluded: “We are very proud to partner with the IAAF to ensure the London World Championships deliver an unforgettable experience to all involved. From the outfitting of all the volunteers with our newest apparel and footwear, to our support of six national federations and many sponsored athletes, ASICS is excited at the opportunity of contributing to inspire millions of people to get physically active!”