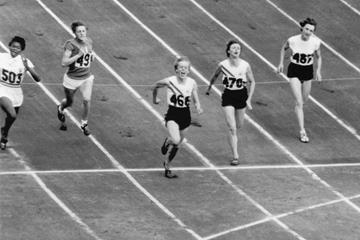 The IAAF is deeply saddened to hear that Australia’s Betty Cuthbert – the only athlete in history to win Olympic gold medals at 100m, 200m and 400m – died on Sunday (6) at the age of 79 after a long battle with multiple sclerosis.

Cuthbert etched her name into Australia’s sporting consciousness at a time when she was not quite ready for fame. She more than made up for that at the other end of her life, defying MS with humility and acceptance and living a happy life far longer than most sufferers of the disease can reasonably hope for.

The word 'iconic' is overused, but in the case of Cuthbert’s performances at the Melbourne 1956 Olympic Games, it was truly appropriate. The sight of the teenage sprinter streaking across the blood-red cinder track especially laid on the Melbourne Cricket Ground, wearing the dark green shorts and white singlet with the green and gold sash, is one of the most famous in Australian sport. And, as everyone knows, there is a lot of Australian sport.

A virtual unknown at the start of 1956, just a chance to make the Australian team in the middle of the Olympic year, and then a three-time Olympic champion in the 100m, 200m and the winning 4x100m relay by the end of the first week of the Games – Cuthbert had an incredible start to what seemed destined to become a long career. Ultimately it would be, too, but there were twists and turns to come.

Cuthbert grew up in Sydney’s western suburbs, within sight of what would become the Sydney 2000 Olympic Stadium at Homebush. She worked in her father’s nursery business.

The story goes that she was so unsure of making the Australian team for Melbourne that she bought tickets. The purchase may well have been more of an insurance policy than evidence of genuine doubts; in either case, it perfectly reflected what was a meteoric rise. The athletics was on in the first week of the Games, so the teenager from Sydney became Australia’s first Olympic hero before swimming legends Jon Hendricks, Murray Rose and Dawn Fraser had even hit the water.

By the end of that magic week, the 18-year-old was a celebrity, dining with Queen Elizabeth II and Prince Phillip in the Olympic Village, attending receptions with local and visiting dignitaries – the whole bit. With the contribution of Shirley Strickland, who won the 80m hurdles and was also a member of the relay, Cuthbert helped Australia to a clean sweep of the limited women’s track gold medals.

It was also the perfect antidote to the misgivings of Melbournians and Australians that they could deliver a successful Games. The build-up to Melbourne was clouded by constant bickering over competition sites, competition schedules, ticketing – you name it, it was a matter of controversy. It all reflected an insecurity that the Games would be a success, an insecurity reinforced by IOC president Avery Brundage’s repeated threats to take the Games off Melbourne.

Cuthbert not only triumphed for herself and her teammates, but for all Melbournians and all Australians. They could do it – and win the premier gold medals at the same time. 'Iconic' was possibly a rare case of Australian understatement.

Cuthbert struggled with the demands of fame after the Games, but she was back for the 1960 Rome Olympics. A hamstring injury wrecked her campaign then, but four years later she came back to win the first Olympic women’s 400m in Tokyo, defeating Britain’s Anne Packer and another Australian, Judy Amoore (now Pollock). Eight years is a significant period between Olympic gold medals even now; back then, the gap between Cuthbert’s third and fourth golds seemed a lifetime.

Within not much more than another decade, Cuthbert was diagnosed with MS. As it does with most sufferers, the disease came up on her blindside, but Cuthbert would go on to live with it for another 40 years.

She moved across the continent to Western Australia, to Mandurah, south of Perth. Buffered by a strong religious faith and an indefatigable friend and carer, Rhonda Gillam, Cuthbert lived a happy and productive life. She was largely out of the public limelight, but made regular appearances. Australia Post included her in a series of stamps honouring Olympic heroes and, speaking at the launch event, she truly believed that one day she would be out of that chair and walking again. If it did not happen in this lifetime, it would in the next.

Athletics and the Olympics remained a part in her life, albeit a minor role. In 2000, she was part of the contingent of legendary female Olympians who carried the torch into the Olympic stadium at the conclusion of the torch relay. The wheelchair-bound Cuthbert was pushed along by Raelene Boyle. The torch wound up with Cathy Freeman, the face of the Sydney Games every bit as much as Cuthbert had been the face of Melbourne’s.

In 2012, Cuthbert flew to Barcelona to be the among the original inductees to the IAAF Hall of Fame (Strickland and Marjorie Jackson (Nelson) have since joined her). As Australian journalist Peter Fitzsimons wrote at the time: “The highlight of the night, for her, came when the most famous inductee of all, Usain Bolt – of course, the fastest human on the planet – came across, bowed, touched her tenderly on the shoulder and exclaimed: ‘Four Olympic gold medals and 16 world records ... wow! You sure could run ...’."

She sure could. And the manner in which Betty Cuthbert coped with sporting triumph andadversity and, subsequently, an illness she would never allow to define her life, was truly inspirational.