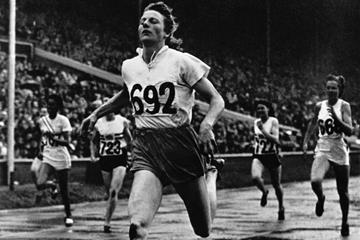 In a glittering ceremony at the World Athletics Gala 99, in Monte-Carlo's Grand Hotel, Carl Lewis and Fanny Blankers-Koen were announced as Top Male and Female Athletes of the 20th Century while Michael Johnson and Gabriela Szabo were selected as World Athletes of 1999.

The winners were chosen by the Council of the International Athletic Foundation from nominations received after a worldwide poll.

By coincidence, both Athletes of the Century are chiefly remembered for winning four Olympic golds in the same Games. Blankers-Koen, of the Netherlands, won the 80m hurdles, the 100m, the 200m and the 4x100m at the 1948 Games in London. The sprightly 81 year-old delighted a press conference earlier today with her astonished reaction when congratulated on her achievement. "You mean it is me who has won. I had no idea!" Blankers-Koen said. "When I think of all the great women athletes of this century, and the young people who are doing so well, I must say that I am surprised … but quite pleased as well! I can still remember every detail of every heat and final in London. Thankfully, my memories are still very vivid."

Lewis defeated another legendary sprinter-jumper Jesse Owens in the men's category. "I have a tremendous respect for Jesse Owens and in many ways he was my mentor - since I could follow his example of Berlin 1936 when planning my own target of winning four titles. I don't think I was better than him because how can you compare different eras?. More important for me is the thought that this award is something that other people have reflected on carefully. Obviously this means that my career has given them as much pleasure as it gave me. This is a tremendous honour and humbling too."

Sweden's Ludmila Engqvist, who battled back from cancer to win a bronze medal at 100m hurdles at the recent World Championships in Seville, was also honoured by the Foundation with a special award for her exceptional courage.