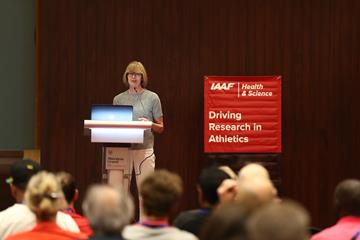 Nearly 180 participants from more than two dozen countries participated in the 1st International Conference on Road Races in Urban and Extreme Environments, held today (4) at the Sheraton hotel in Doha.

The conference brought together event organisers, physicians, coaches, trainers and other key players involved in road race organisation and management to improve their knowledge of the effects of extreme environments on physical performance and to discover how to prevent or treat heat-related illnesses and injuries that occur during endurance events.

Many of the speakers, leading experts, researchers and practitioners in the field, are in the Qatari capital this week to assist in the preparation and operation of the medical facilities used for the road endurance events during the IAAF World Athletics Championships Doha 2019.

The IAAF’s Health and Science Department Manager Paolo Emilio Adami said the main goal of the conference was to strengthen the department’s relationship with road races, in particular IAAF Label-level road races, events which attract hundreds of thousands of participants each year.

More generally, Adami said, the conference is part of “our commitment to sports in general, to show what we’re doing. We are somewhat at the forefront compared to others federations, because of the resource that we have. So we have made that commitment to others.”

Part of that research is the IAAF’s Heat Stress project that’s currently taking place throughout the championships. More than 50 athletes have volunteered to take part so far by consuming an electronic capsule that contains a thermometer and transmitter which monitored their core temperature throughout their races. That number is expected to double after tonight’s men’s 20km race walk and tomorrow’s men’s marathon.

“We initially allocated 15 pills for each of the road events,” Adami said, “but we’re seeing an increased interest on the part of athletes. If we had all the endurance events at the end of the championships, we probably would have run out of pills.” Another 25 have been allocated for tonight, and a similar number for Saturday’s marathon.

While data collected during the first three road events won’t be fully analysed for another two or three weeks, Adami said, a partial overview of the research was shared along with some images showing what the research entailed, how it was conducted and what it looked like.

Adami said he was encouraged by the wide range of participants which included organisers of endurance events in Spain, Canada, China, India and Thailand among others along with representatives of other international sports federations, including the International Triathlon Union.

“I really enjoyed that the audience was very heterogeneous, and that the type of content that we provided could be appreciated by all of them. We had coaches, trainers, physicians - everyone could take something out of it.”

“It’s important that we disseminate the research that we do and involved those that are active and have expertise. They are organising the races and they are the ones providing the medical services.

The two-day event continues on Saturday (5) with the IAAF Race Emergency Medicine Workshop designed to provide race medical directors with the abilities and skills to manage various scenarios related to race day medical and health care management during endurance events.