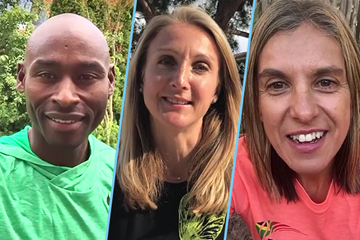 Paula Radcliffe, Bernard Lagat and Elana Meyer are among many athletics stars who will be supporting Global Running Day on 7 June.

Global Running Day is a grassroots initiative where people of all abilities and from all paths of life come together to celebrate their passion for running and inspire others to get moving.

“Running is my life,” said three-time world indoor champion Lagat. “In celebrating Global Running Day, I pledge to organise a three-kilometre run with my friends and their families. I encourage everyone to do the same on 7 June as we celebrate Global Running Day.”

In 2016, more than 2.5 million people from 177 countries, including nearly 700,000 kids, pledged to run 9.2 million miles, or nearly 15 million kilometres, on Global Running Day. The day received more than one billion impressions on social media, with running activities taking place across the globe from New Zealand to New York.

“Here in Monaco I’m going to be getting as many school children as possible involved in Global Running Day on 7 June, taking part in the Million Kid Run,” added Radcliffe, the marathon world record-holder. “Then, at lunchtime, we’re running with adults. Please pledge how many miles or kilometres you’re going to run at GlobalRunningDay.org.”

The second annual Million Kid Run, which aims to have a million children around the world pledge to run on 7 June, will once again be the centrepiece of Global Running Day. The Million Kid Run is about making fitness fun and inspiring kids to embrace running as a way to get moving and stay healthy. From a school administrator pledging students, to a youth coach pledging their running team, to a parent pledging their child, kids around the world will come together to celebrate the power and benefits of running and fitness. Participation is easy and can include any activity from a solo lap around the block to a game of tag with your kids.

“I love running; running is in my blood, it gives me loads of energy every day,” said Meyer, the 1992 Olympic 10,000m silver medallist. “I’ve pledged to run on Global Running Day on 7 June; I want to encourage you to do the same.”

Runners of all ages and abilities can pledge to take part in the day via GlobalRunningDay.org.