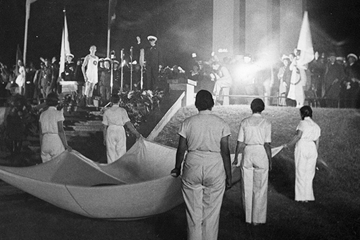 The IAAF is saddened to hear that Guo Jie, who represented China in the discus at the 1936 Olympic Games, died on Sunday (15) at the age of 103. He had been the oldest surviving Olympian.

Born in Dalian in January 1912, Guo competed in several sports during his youth, but it was the discus in which he excelled and he won that event at the 1935 Chinese National Games.

Inspired to compete at the Olympics after reading about Liu Changchun – China’s first ever Olympian – Guo qualified for the 1936 Games in Berlin by setting a national record of 41.07m.

He improved on that mark at the Olympics, throwing 41.13m, but it wasn’t enough to progress to the final.

Guo continued to compete in athletics after returning from the 1936 Olympics. He also studied agricultural science and technology at the University of Tokyo, and then went on to work in that field in Peking and Xi’an.

He returned to his sporting roots in the 1950s and became a researcher and coach at the Xi’an Institute of Physical Education, continuing his work long after his official retirement in 1987.

Leading up to the 2008 Olympics in Beijing, he carried the Olympic torch through the streets of Xi’an.