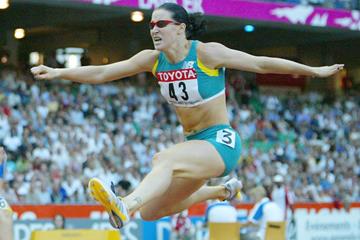 Important mementoes from the competitive careers of the four IAAF Continental Cup Ostrava 2018 Ambassadors have been generously loaned to enhance the forthcoming IAAF Heritage World / Continental Cup – 1977 To 2018 – Exhibition.

The exhibition will open in the Forum Nova Karolina Shopping Centre in the Czech city of Ostrava on Tuesday 5 June and run until the last day of the IAAF Continental Cup Ostrava 2018 on 9 September.

Team Africa Ambassador Nezha Bidouane made her name as a hurdler, her two world titles and other international successes coming in the 400m hurdles.

A competitor for Africa in the three World Cups during the 1990s, including a win in 1998, the Moroccan has provided the bodysuit and spikes that helped her to victory at the second of her two World Championships triumphs in 2001. Donated to the IAAF in 2005, her kit was previously displayed at the IAAF Centenary Exhibition in 2012.

Team Americas Ambassador Mike Powell, the two-time world long jump champion, has loaned one of the competition bibs from his victory at the IAAF World Championships Tokyo 1991.

The competition remains in many people’s memory for his fantastic head-to-head duel with fellow US long jumper Carl Lewis which resulted in Powell winning with a world record of 8.95m, a mark that still stands almost 27 years later.

Along with the bib is a signed copy of the 9 September 1991 edition of Sports Illustrated, the front cover of which has an image of Powell in flight, moments prior to setting the record.

At the IAAF World Championships Paris 2003, Team Asia-Pacific Ambassador Jana Pittman succeeded Bidouane for the first of her two world 400m hurdles titles. The Australian has loaned the IAAF Heritage Exhibition her competition vest and bib number 43, which she wore when winning in the French capital.

Pittman competed at the 2002 World Cup while still only 19 but, sadly, injury prevented her from participating in 2006 or the inaugural IAAF Continental Cup in 2010.

Sprint hurdles legend Colin Jackson, who competed on four occasions for Great Britain at the IAAF World Cup, provided arguably the best performance of the 1992 edition when winning his specialist event in 13.07. He will be the Team Europe Ambassador at this year’s Continental Cup.

On display at the Exhibition from Jackson is the vest in which he sped to a 110m hurdles world record of 12.91 at the IAAF World Championships Stuttgart 1993. Similar to Bidouane’s kit, Jackson’s vest was donated to the IAAF more than a decade ago and was last publically displayed in 2012.