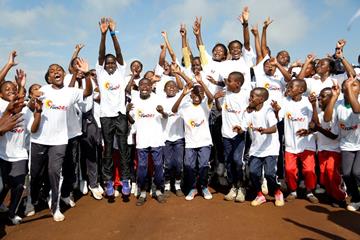 At the half-way stage of the IAAF Run 24:1, 12 cities have now hosted one-mile runs, with more than 10,000 participants completing the challenge in the eastern hemisphere.

From Fiji in the South Pacific, through Beijing, Delhi, Nairobi and on to Copenhagen, which kicked off the European leg of the race around the world, people from all nations have been celebrating the joy of running.

Olympic champions, world champions and world record-holders are among those who have come out to encourage recreational runners to join them.

There was a huge turnout of almost 3000 people in Mauritius in the Indian Ocean and high spirits in Nairobi National Park, where wildlife officers were on hand to keep the runners apart from the giraffes that frequent that area.

By holding a leg of the run at its Mediterranean Sea port, Gaza in Palestine marked a particular milestone, hosting its first international sporting event.

This is the first time that competitors in Gaza have been part of an international sporting event, and they were keen to show their stuff! 🇵🇸🏃‍♂️🏃‍♀️ pic.twitter.com/gIKRI1SzNl

Every hour the global running event moves westward in its quest to cover 24 one-mile runs in 24 cities over 24 hours. From seven years of age to 80-year-olds, elite runners to first-time runners, dignitaries to club runners joined together to celebrate the spirit of Global Running Day.

Commenting on the first half of day, IAAF President Sebastian Coe said: “Whether people walk their mile or run it, they are part of this global movement and can inspire others to run or walk their #FirstMile. Our hope is that our first-time milers will have had fun, met new people and will keep on running.”

Over the next few hours, Run 24:1 will complete its path through Europe and Africa, before moving on to the Americas, where runners in Bogota, Sao Paolo, Santiago, Havana and Mexico City are eagerly awaiting their chance to shine, before the 24-hour event hits the finish line in Atlanta in the United States.