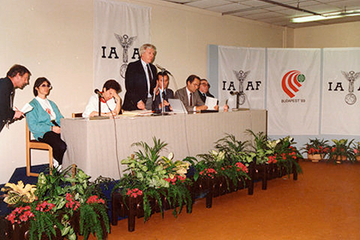 The IAAF is deeply saddened to receive the news that John Holt, who served as IAAF General Secretary from 1976 to 1991, died on Thursday (17) from a heart attack at the age of 77.

Born in December 1938, Holt was a talented runner in his youth and won the British junior 440 yards title. He went on to take the silver medal in the 800m at the 1959 World University Games.

During his time at the IAAF, Holt served under the presidencies of Adriaan Paulen (1976-1981) and Primo Nebiolo (1981-1999). It was a period of huge development for the IAAF as the sport moved from an amateur to a professional one and the organisation, then based in London, grew from five employees to 50.

At the 1976 IAAF Congress in Montreal, the existing role of IAAF Honorary Secretary-Treasurer was split. Frederick ('Fred') W Holder, who had held that position since 1970 and who in Montreal had lost the election for president to Paulen, was elected in the new role as Honorary Treasurer, with the new Council appointing Holt as the organisation’s first full-time General Secretary.

“John Holt was at the helm of the IAAF at a time of immense change for the association and athletics as a whole,” said IAAF President Sebastian Coe. “Holt’s professional management, passion and dedication for the sport he loved was widely admired and helped guide athletics from amateurism to an increasingly professional era. During his tenure, the Olympic Games ceased constitutionally to be athletics’ world championships, with the inaugural IAAF World Championships in 1983 signalling a major transformation in the sport’s calendar and financial fortunes. Holt’s role in this process is a truly great legacy.”

After 15 years, Holt left the IAAF in November 1991, his position filled by Hungarian Istvan Gyulai. Holt, who was an accomplished amateur pianist, later moved with his wife Ann to Argyll, Scotland but more latterly they had come back south and made their home in York, England.

The IAAF on behalf of the global athletics family offers its sincerest sympathy and condolences to his wife, two sons and his extended family and friends.