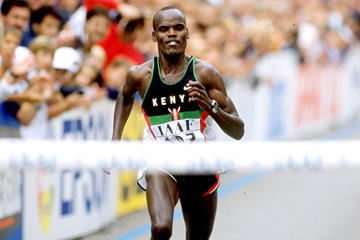 The IAAF is deeply saddened to hear that Kenya’s 1998 world half marathon champion Paul Koech died on Tuesday (4) after a short illness at the age of 49.

Born in 1969 in the Burnt Forest area of Rift Valley province, Koech’s first taste of athletics came in the sprint events during his time at school. He later spent time at the Armed Forces Training College, by which time he was showing promise as a distance runner.

He started racing internationally in 1995 but his big breakthrough came in 1996. He finished fourth at the IAAF World Cross Country Championships earlier that year and went on to finish sixth in the 10,000m at the Olympic Games in Atlanta.

He started 1997 by winning the hotly contested Kenyan Cross-Country Championships – the first of three successive victories – and he added another domestic title to his collection later that year when winning the national 10,000m crown.

Koech went on to finish fourth in the 10,000m at the 1997 World Championships in Athens where his niece, Sally Barsosio, struck gold in the women’s event.

In the weeks following the World Championships, Koech reduced his PBs to 12:56.29 for 5000m and 26:36.26 for 10,000m. His performance in the latter event came when finishing second to Paul Tergat’s world record of 26:27.85 in Brussels and made Koech the third-fastest man in history at that time. Now, 21 years on from that race, Koech sits at No.7 on the world all-time list.

He represented Kenya at the World Cross Country Championships on six occasions between 1996 and 2003, finishing in the top six individually and taking a team gold medal on each occasion.

He moved up in distance later in his career and finished second at the 2003 Chicago Marathon in 2:07:07.

“Paul was a great track, cross country and road racing athlete,” Athletics Kenya said in a statement. “He was a dedicated team player in Kenya’s national and World Cross Country squad.”