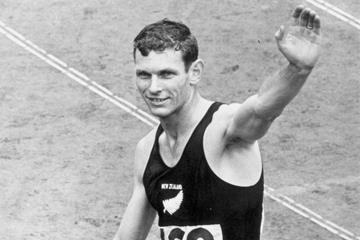 World Athletics is deeply saddened to hear that New Zealand’s 1964 Olympic 800m and 1500m champion Peter Snell died on Thursday (12) at the age of 80.

New Zealand has a strong middle-distance tradition, but Snell was perhaps the greatest of all to wear the famous all-black kit.

Born in the small town of Opunake in 1938, Snell and his family moved to Waikato in 1949 and it was there where he developed his all-round sporting skills. He excelled at several sports, but at the age of 19 the legendary Arthur Lydiard, who was to become Snell’s future coach, told him: “Peter, with the sort of speed you've got, if you do the endurance training, you could be one of our best middle-distance runners.”

Just a few years later, and now under the tutelage of Lydiard, Snell arrived in Rome for the 1960 Olympic Games as a complete outsider for the 800m, but he showed his potential when he won his semi-final, beating Belgium's world record-holder Roger Moens.

Snell repeated that feat in the final to take the gold medal with a dramatic burst of speed over the final 30 metres, winning in an Olympic record of 1:46.3.

Both finals in the Japanese capital were won in similar fashion, by a devastating burst of acceleration midway along the back straight on the final lap.

After his triumph in Tokyo, he reduced his mile world record to 3:54.1 on home soil in Auckland in November that year.

He retired at the end of the 1965 season and moved to the USA in 1971, where he gained degrees in human performance and exercise physiology. In 2000 he was voted New Zealand’s athlete of the century.

In recent years he became an active orienteer and won national masters titles in that sport. He was also a competitive table tennis player and competed in that sport at the 2017 World Masters Games.

Snell had been due to attend the recent World Athletics Heritage Mile night in Monaco and was even set to defy doctors’ orders not to travel, but he decided against it at the last minute after feeling unwell at the airport.

Snell, who would have turned 81 next week, is survived by his wife Miki and daughters Amanda and Jacqui.