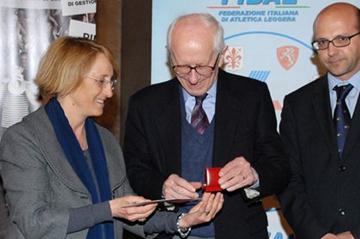 The IAAF is deeply saddened to hear that renowned athletics historian Roberto Luigi Quercetani died on Monday (13) at the age of 97.

The doyen of athletics statisticians, Quercetani was a founder member of the Association of Track Field Statisticians (ATFS) and its president from 1950 until 1968 and the general editor of the ATFS Annual each year to 1969.

RLQ, as he was affectionately known, was one of the most prolific and knowledgeable of athletics historians and statisticians. During his long lifetime he produced a colossal body of work – books that document track and field in minute and loving detail from the pioneering Handbook on Olympic Games Track and Field Athletics with Don Potts in 1948.

His first major work in English was A World History of Track and Field Athletics 1864-1964, a superbly written and authoritative account of how our sport developed over that century. Further versions were both updated and published in various languages and over the years he wrote books dealing with the history of individual groups of events.

He led the compilation and publication of four volumes of Track & Field Performances Through the Years that covered world lists from 1921 to 1950, the years before the annual ATFS lists.

A freelance journalist, he covered most of the world’s major athletics events for many years, especially from 1951 for La Gazzetto dello Sport and contributed to a wide range of publications. A lover of trivia, his final offering – written in his nineties – was entitled Intriguing Facts & Figures from Athletics History 1860-2014 and dedicated to his beloved wife Maria Luisa “for her untiring support and understanding”.

Born in Florence in May 1922, Quercetani was only 10 when athletics entered his life. He was out walking with his father in August 1932 when he caught sight of a large cinema screen on top of a building announcing that Luigi Beccali had won the Olympic 1500m title in Los Angeles the previous day. That fired his imagination and he started collecting newspaper clippings relating to athletics. It was the start of a lifetime's obsession with the sport's facts and figures. Among his earliest treasured memories was of seeing Beccali set an Italian 800m record during halftime at a football match in his native city in 1933.

From schooldays he became a student and master of foreign languages, skills that helped him to establish contacts and friendships worldwide and that enabled him to become an interpreter with the Allied armies in Italy by 1944. During his teens he avidly read Italian, French, German, Swedish and American sports newspapers and magazines as he subscribed to and contributed to publications in several countries from the late 1930s.

Soon after the war, he started corresponding with US mathematician Donald Potts in California. They formed a famous partnership that produced the first detailed world all-time lists and led to the extensive documentation athletics to which we are accustomed but which was exceptionally poor when Roberto and his associates started their work. He also started the prestigious and authoritative annual World Merit Rankings for Track & Field News in 1947.

Quercetani also collaborated closely with Swiss statistician Fulvio Regli and it was he who proposed forming an international association of athletics statisticians. The ATFS was duly formed in a café in Brussels during the 1950 European Championships. The founder members were Quercetani, Regli, Bruno Bonomelli, André Greuze, Erich Kamper, Norris McWhirter, André Senay, Björn-Johan Weckman and Ekkehard zur Megede plus two others who could not be present: Potts and Wolfgang Wünsche.

Quercetani was elected president with Harold Abrahams as honorary president. The first ATFS Annual, edited by Quercetani and Regli, appeared in 1951 – a huge breakthrough in the collation of statistics, and the publication of that invaluable annual continues to this day.

“His name will always be revered by those of us who cherish his body of work, and those who had the privilege of knowing him have lost a wise and genial friend,” said statistician Mel Watman.

“As I wrote in the ATFS Jubilee Book in 2000, ‘to me, RLQ was a god’ when I started my life-long hobby of athletics statistics in the late 1950s, and I have felt hugely honoured to have followed in his footsteps as Editor of the ATFS Annual from 1984,” said Peter Matthews. “I was delighted that until very recently Roberto liked to submit one of his cogent and well-researched articles for inclusion in the Annual each year. It was always a delight to meet him at various major meetings until he decided a few years ago to ‘retire’ from such travel.”

Quercetani is survived by his wife, Maria Luisa.

Athletics International for the IAAF