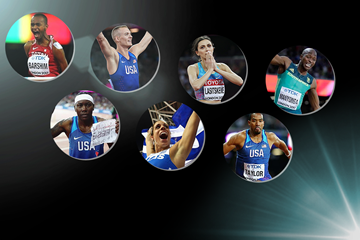 With just four days to go before voting for the 2017 World Athletes of the Year concludes, here’s another look at this year's men’s and women’s longlist candidates, focusing today on those who excelled in the jumps.

Mutaz Essa Barshim (QAT) was one of the most consistent and dominant athletes of the year, piecing together an undefeated season in 11 competitions. The 26-year-old took the world title, the IAAF Diamond League title, and produced the three best leaps of the year, and nine of the best 11, capped by his two 2.40m world-leading efforts.

Sam Kendricks (USA) also produced one of the season's most notable campaigns, finishing the year undefeated in 17 competitions indoors and out. The 25-year-old pole vaulter won the world and IAAF Diamond League crowns and produced three of the four best leaps in the world, topped by his 6.00m effort at the US Championships.

Maria Lasitskene (ANA) was among the most dominant forces in the world in 2017. The 24-year-old high jumper claimed her second world title, won the IAAF Diamond League title and finished the year undefeated indoors and out in 24 competitions. Lasitskene moved to equal fifth on the world all-time list with her world-leading 2.06m. She topped 2.00m 14 times; only two other jumpers managed the feat this year, once each.

Luvo Manyonga (RSA) also finished the season undefeated, winning each of his nine long jump competitions. Winner of the world and IAAF Diamond League titles, the 25-year-old led the world with an 8.65m leap and produced the four farthest jumps in the world and eight of the best nine.

Ekaterini Stefanidi (GRE) was undefeated in 11 pole vault competitions outdoors this year, claimed the world and IAAF Diamond League titles and led the world at 4.91m to move to equal fourth on the world all-time list. The 27-year-old also produced the three highest clearances of the year.

Christian Taylor (USA) won a third world title this year and leapt to the IAAF Diamond League title. The 27-year-old won nine of 12 triple jump competitions, led the world with an 18.11m leap, and produced five of the nine farthest jumps.

Voting procedure for 2017 World Athletes of the Year

The IAAF Council and the IAAF Family will cast their votes by email, while fans can vote online via the IAAF's social media platforms. Individual graphics for each nominee have been posted on Facebook and Twitter; a 'like' on Facebook or a retweet on Twitter will count as one vote.

Voting closes on 16 October. At the conclusion of the voting process, three men and three women finalists will be announced by the IAAF.

The male and female World Athletes of the Year will be announced live on stage at the IAAF Athletics Awards 2017 in Monaco on Friday 24 November.