Inner Mongolia sounds like the sort of destination that takes two days to get to by camel while following Marco Polo down a winding track.

In fact Erdos is a Chinese city there, so spanking new it defines the word pristine, and to get there only demanded a comfortable air ride for those at the final of the 10th IAAF World Race Walking Challenge in September. And like the explorers and traders of old, there were riches at the end of the trail.

The lure of a share in $200,000 for a mere 10km of racing was good enough to entice walkers from all over the world a decade after the IAAF first conceived a Grand Prix for heel and toe.

However, payday rules demanded competition in three races prior to showdown day from an approved list before winner took most – with a sliding scale for the next seven in both the men and women’s division.

But when China hosts, China expects. Two years ago, the IAAF Challenge Final was held in Beijing, and a World junior record to go with four out of top eight places for men and women went to China.

Back then, precocious teenager Wang Zhen lit the afterburners to clock 37:44 and put his name in the record books. Clearly, he has the taste for it, because Wang won in Erdos as well; this time in a slower 39:27 – although the term ‘slower’ is relative.

When you’re churning out kilometres at 3:57 a click, it’s worth remembering that’s 2:46:00 marathon pace – and don’t think for a moment this fantastic athlete would fail to maintain the same pace for another 32km.

At just 21, the Olympic bronze medallist can pile up dollars by the barrow-load if he so chooses over the next five or six years, based on his rise since 2010.

He also won the IAAF World Race Walking Cup in May as well as the IAAF Challenge in Taicang in March where he added an Asian 20km record of 1:17:36 to his CV and win there for the second consecutive year while lowering his personal best by a chunky 54 seconds.

In Erdos, another 21-year-old, Cai Zelin, finished in 39:44, 17 seconds behind Wang, and followed Wang home. Cai finished an impressive fourth at the Olympics competing at his first major championships.

But Olympic champion Chen Ding appeared to have left the best of his racing in London where he won the gold, and came home a solid third in Erdos in 39:51.

As for Chinese men’s success – ditto the women. Liu Hong was the 2010 and 2011 IAAF Challenge bridesmaid, but she walked down the aisle this time all the way to the winning tape for third time lucky as a consolation for a disappointing Olympics where she faded to fourth.

She was never in danger in the Erdos race, but there was a minor disaster for Qieyang Shenjie when the Olympic bronze medallist fell foul of the judges and was disqualified.

It left the door open for Ana Cabecinha to come home to her best ever result, with a second Chinese, Lu Xiuzhi, behind the Portuguese.

Both second and third put the cap on a fine 2012 with top-10 places just about every time the pair pulled on a pair of racing shoes.

Beatriz Pascual of Spain capped off a stellar year for fourth in 43:54 and Italy’s Elisa Rigaudo fifth in 44:24 to add to the international flavour.

The Olympics and the IAAF World Race Walking Cup also counted as races in the Challenge. But as races in their own right, the year started well for Jared Tallent winning his fifth consecutive Australian 20km Race Walk title around Hobart’s docks.

The 38 degrees suffered during the race was only the 16th time in 117 years the temperature had got that high in the Tasmanian city – so 1:23:01 for first place was remarkable in the circumstances.

Tallent spotting was easy when wife Claire and sister Rachel won the women’s and junior races, the former’s performance good enough to get her into the Australian Olympic team. They weren’t done there.

Just a week later they raced in Chihuahua, scene of the 2010 IAAF World Race Walking Cup, and came second in their respective races.

Mexican hero Eder Sánchez added to his homegrown popularity by winning the 20km comfortably from Jared, who nonetheless shook off jet lag and Hobart to finish more than a minute quicker than his first effort, while Omar Zepeda headed two other Mexicans for first at 50km.

As mentioned, Taicang and China at the end of March was Wang and Liu territory with Asian records for both, and the fastest in-depth race of the series. The top 14 men were under 84 minutes for 20km, and all but one of the 12 women breezed under 1:40:00.

Yet again, the Tallents got stuck in. Jared was fifth and Claire blistered the course for an amazing 1:28:53 that was still only good enough for fifth.

Rio Maior has been a regular Challenge staging post in April, and it was in Portugal the Challenge saw one its best 2012 races when Pascual won the women’s 20km from Cabecinha who was to get her revenge in Erdos.

The unusual hard rain and wind might have been unpleasant for spectators, but it had little effect on Slovakian Matej Toth. The 2010 World Cup winner at 50km posted a nippy 1:20:25 to head Sanchez and a second Mexican, Isaac Palma, with Ireland’s Robert Heffernan fourth.

It was getting to be a familiar tale by the time China posted two out of the first three men at La Coruna in June. In the past, the Chinese have been rock solid at home but not always good on their travels.

Pascual’s year to remember continued its joyous way for second in northern Spain, and she was followed by 2010 World Cup winner and team-mate María Vasco.

No Challenge would be complete without the Sesto San Giovanni 20kms. It was just that walkers might have celebrated the 555th anniversary of the races around the northern Milanese suburb a bit better had it been less than 34 degrees in the shade.

One of the hottest days for the classic played nicely into the hands of Sanchez, who as a former overall Challenge winner got his fourth individual win in a relatively slow 1:24:52 – but a comfortable 30 seconds in front of Petr Trofimov of Russia, and nearly a minute ahead of Japan’s Yusuke Suzuki as walkers wilted in the heat haze.

Defying the stereotype, Tatyana Sibileva showed Russians can stand the heat to front the women’s race, while Ireland’s Olive Loughnane made a belated climb to a podium for second. Claire Tallent lugged her suitcase to yet another Challenge port-of-call, this time to claim third.

There was a thread about the 2012 Challenge that saw all those eventually lining up for cheques in Erdos enjoying form throughout the year, even as they switched and jostled for places in very competitive fields.

Thanks to the excellent IAAF prize fund they can get elbows out again as they jostle to cash them at the bank. 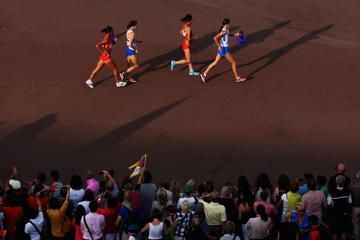 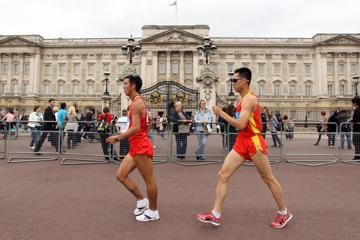 Saransk, London and Erdos - A glance at this ... 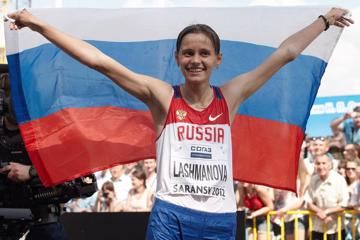 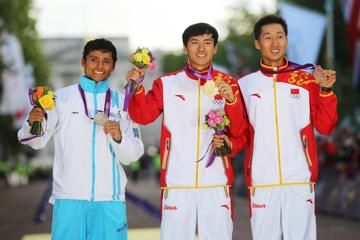 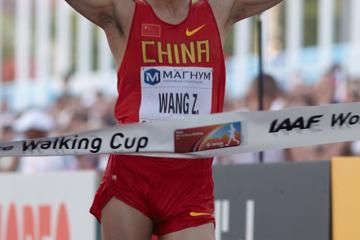 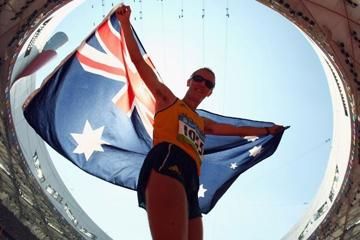 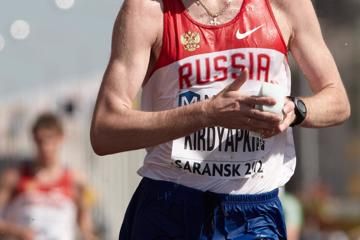 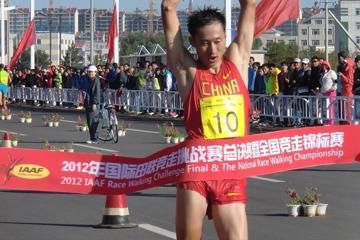