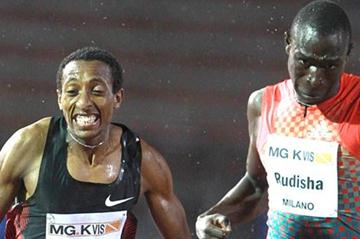 After beating Rudisha, Ethiopian teenager Aman now confident of writing his own history

Addis Ababa, Ethiopia - Surely, you have read this story before.

A young Ethiopian born in the rural countryside of this topographically-diverse nation watches one of the country’s legion of long distance running heroes to take up the sport in athletics. Driven by the motivation to make it to the very top and change his and her family’s fortunes through race winnings, this runner trains long and hard. Eventually, this runner makes it to the very top winning races around the world, titles in major championships, and hard-earned cash that transforms the life of his or her family.

However, Ethiopian 800m record holder Mohammed Aman’s story is so different from the typical Ethiopian athletics rags to riches tale that he might as well have joined hundreds of his compatriots in realms of obscurity.

Instead, the 17-year old is just ending an outstanding breakout year where he won 800m silver at the IAAF World Youth Championships in Lille, France; reached the final of the 800m at the World Championships in Daegu, South Korea; improved the seven-year Ethiopian national record over the event to 1:43.37; and then caused the mother of all surprises when beating Kenyan World champion and world record holder David Rudisha in a tight race in Milan.

The two-time African junior champion says he is contributing to dismissing the myth that Ethiopians cannot excel over the short and middle distance events. “I believe that these beliefs are a long term wrong perception,” he says. “If we work hard, we can get better results in short and middle distance events too. There are a lots of youngsters with the talent, we just need hard work.”

No farm work, athletics in school

Part of the myth that Ethiopians can only exceed in long distance events is enshrined into how many of the country’s top athletes start athletics. Much like distance running legend Haile Gebrselassie, Aman was born in Assela, 223kms southeast of the capital Addis Ababa.

But unlike Gebrselassie and other top distance runners, Aman did not go through a rural upbringing of helping his parents on the farm, running long distances to a nearby water source to fetch water, or endure long trips to school on foot every day. “I have five sisters and two brothers and I am the fifth child of eight,” says Aman of his upbringing. “My father was a teacher, but now works in a government office. My mom is a house wife. I went to school in Assela which was near our house and did not need to run to school every day.”

Instead, he started athletics in school and then later joined a youth development project supported by the Ethiopian Athletics Federation (EAF) in Assela in 2007. “There is a project in Assela set up by EAF and friends from our neighbourhood told me that they are registered to take part and urged me to do it,” he says. “I followed their advice and registered, but kept my concentration on academics.”

Like other hopefuls, Aman would grace the dusty track at the Green Flood stadium in Assela everyday, but knew from the onset that he wanted to concentrate in the middle distance events. “We all lived with our families and trained when our school shifts were over,” he says. “It was a good way to combine school and athletics. We had some difficulties with getting the proper training shoes and sufficient diet to replace what we would expend during our training. There were many talented runners in the project, but some of then left later to focus fully on their school.”

For Aman, however, the rise to the top was rapid. Less than a year after he joined the project, he was selected to represent his project in the Oromiya regional championships where he won a 400m/800m double. He made his international debut in Abuja, Nigeria where he ran an encouraging 1:50.29.

His first taste of glory came at the 2009 African Junior Championships in Bambous, Mauritius when he took victory in 1:48.82, an Ethiopian junior record.

Inspired during the Youth Olympic Games

But he was one of the five Ethiopian gold medallists in the Indian Ocean coastal city, which meant that it took time for the significance of his result to set in the minds of the national coaching staff.

“There have been other Ethiopian runners who have won gold at junior level, but failed to become successful at senior level,” he says. “But I was happy with Mauritius. It proved to me the decision to pursue the 800m.”

His decision would be further justified a year later when he won a surprise gold at the inaugural World Youth Olympics in Singapore under similarly-hot and humid conditions. Running in only his sixth race outside Ethiopia, Aman took victory over the 1000m in 2:19.54, another Ethiopian junior record.

“The Singapore Youth Olympic Games was the first ever one to be held and gave me great experience on how delightful the Olympic Games are,” he says. “There were culture exchanges and education programs, but as I was training at the time with a lot of focus, I did not get a chance to take part except observing. But I liked the fact that some famous athletes like [Wilson] Kipketer and [Sergey] Bubka came and shared their experiences for us. It was a great atmosphere and I made friends with other athletes.”

Apart from the mentoring he received in Singapore, Aman essentially picked up the need to use technology to communicate with his fans and followers. Unlike many top level Ethiopian athletes, Aman is a semi-avid fan of Facebook and regularly posts photos of his races and receives comments from his fans.

Despite his victories in Bambous and Singapore, Aman began 2011 with modest ambitions. “I was only 16 at the time and I said myself that it would be good to take part in Lille and maybe try and qualify for the World championships,” he says. “But my training went really well and when the outdoor season came, I knew that I would run well.”

In his third race of the season, he ran so well in the Meeting de Montreuil in France by clocking 1:45.74 to qualify for the World Championships later in the year. “I was delighted about it because it came early in the season,” he says about his performance. “But I knew that I had a long season ahead of me and the Federation wanted me to compete in all the races.”

Over the next three months, Aman went through a packed competition schedule that was atypical for a 17-year old middle distance runner. First, he successfully defended his title at the African Junior Championships in Gaborone, Botswana winning the 800m in 1:46.62. Then, he returned back to France, this time in the northern city of Lille, for the IAAF World Youth Championships.

“I am not surprised by what happened in Lille,” he says about going into the race as the favorite but finishing second after waging a fierce battle with Kenyan Leonard Kirwa. “He was just too strong. I gave it my best.”

The result of his best was a stunning 1:44.68, behind Kirwa’s world junior record time of 1:44.08 but well clear of Berhanu Alemu’s senior national record time of 1:45.28 set in Bergen, Norway seven years earlier.

His exploits in Lille meant that he would go to the World championships in Daegu, South Korea expecting to be much more than an also-ran. He coasted easily in the first round, won a strong semi-final heat that included Sudan’s double World indoor champion Abubaker Kaki, and started well in the final before fading to finish last.

“I got a lot of experience from Daegu,” he now recalls. “There were a lot of famous athletes in this competition and for me it was the first World championship. There were different kinds of running style and tactics. I think I learned a lot and it will help me for my future. After the first qualifying round, I knew that I would reach the final.”

But his season was by no means over. “I had many invitations to compete in meetings and decided to accept all because I was in great shape and knew I could improve further,” he says. “I wanted to run 1:43 this year and knew I could do it.”

Aman was true to his word a week after Daegu when he clocked 1:43.37 to smash his own personal best yet again and finish third in a competitive race behind Rudisha in what was a World record attempt. After victory in Rovereto (1:46.48) and a second place finish in Brussels (1:44.29), Aman knew he had one big performance left in him as he prepared for his final race of the season in Milan.

“The Milan race was held for Rudisha” he says. “There were pacemakers set for him. He expected to run well as we all do. But all of a sudden, there was heavy rain and I think that somehow was not good for this plan. For me, it was the same. I had planned to run well and when there was 100m to go, I knew I could push. I was so happy that I won the race. I remember after the race that Rudisha turned towards me and asked ‘How can you run like this under the heavy rain?’ I just smiled. He said ‘well done and keep it up’. That was really big of him to say that.”

The shy 17-year old might smile at his rivals after beating them, but there is little doubt that he can be ruthless when he gets down to the business on the track. Could this self-confessed action movie fan have learned such ruthlessness from the big screens perhaps?

“I do love to work hard and enjoy a good action film in my downtime,” he says laughing off suggestions that watching Jackie Chan and Jet Li in combat made part of his training routine. “They make such complicated moves very simple. I also love watching Arsenal matches because they play attractive football.”

Big sacrifices for big dreams in 2012

With 2011 almost over and Aman just returning back to training after a well-deserved break, 2012 promises to be a big year for the overachieving youngster. He has already set sights on the three competitions - the IAAF World Indoor Championships in Istanbul, Turkey; the African Championships in Porto Nuovo, Benin; and the biggest of them all, the 2012 Olympic Games in London.

“With the help of God and if I stay injury free, I am hopeful of competing in all three,” he says. “My big ambition is winning a medal each in Istanbul and London.”

A devoted Muslim who frequents his mosque in Addis Ababa for prayers, Aman will not fast during the holy month of Ramadan in 2012, which will coincide with the Olympics in London, to help him achieve the required results in the English capital.

“I know that as a Muslim I have to strictly fast during Ramadan, but I will not fast next year because my training and competitions,” he says. “It will be a big sacrifice I plan to take in 2012.”

“Why not,” he says. “It is part of my career ambition. I have huge respect for Rudisha, but I have big ambitions for my career and the world record is one of them.”

A child of white-collars from a semi-urban setting, regularly using Facebook, and making history by successfully competing in an unusual event for Ethiopian athletes - this is the story so far of Mohammed Aman, not a fictitional tale!