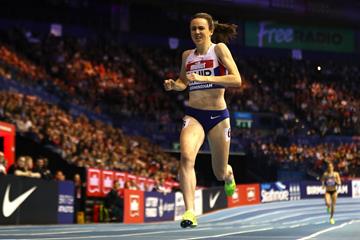 Muir set to return to Birmingham for Indoor Grand Prix

“Having won my two world indoor medals there as well as breaking the British 1000m record back in 2017, it’s really exciting to be returning to the Arena Birmingham for the Müller Indoor Grand Prix Birmingham next February,” said the 25-year-old.

“Historically the Muller Indoor Grand Prix is an event I’ve always managed to perform well at, and where Birmingham is concerned I know that as an athlete you’re always in for an amazing atmosphere at what is the showpiece indoor event of the season.

“I know that there will lots of fantastic races with many of the top athletes on the planet, and I can't wait to be part of that,” she added. “I’d love to win again in front of the fantastic British fans; that'd be a great start to another big season for me in 2019.”