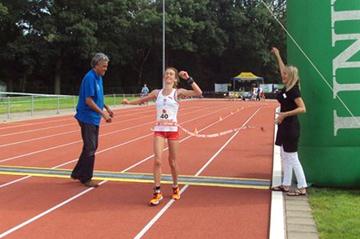 Kenya's Eliot Kiplagat Biwott and Britain's Emma Gooderham won the 8th IAU 50km World Trophy Final in the Dutch city of Assen on 20 August. Both winners set course records with Biwott running a time of 2:54:53 and Gooderham finishing in 3:17:30.

Assen, located about two-and-a-half hours away from Amsterdam, is referred to as “the town among the trees”.

The race was organised on 10 loops of a five-kilometre flat and a fast course. There was also an open race that was run concurrently with the World Trophy Final.

Race day temperatures were around mind-teens at the start and warmed up as the day went on. With the fast field assembled at the start there was talk of a potential course record which formerly stood at 3:09:49 and 3:58:43 for the men and women respectively. This would prove to be true for both fields.

In the men’s event, rookie IAU runner Biwott took the top honours winning the race in course record time of 2:54:53. Belgium's Pieter Vermeesch, who is having an outstanding season, finished in second place with 2:57:23 and Japan's Kaito Iwayama, last year’s fourth-place finisher, finished third in 2:59:12.

Early race leaders John Wachira (KEN), Seun Moleshioa (RSA) and Eliza Mogoboya (RSA) started with a blistering pace running through the first two thirds of the race. By the 35km mark, there were some definite moves that had begun to take place. Biwott, having run a conservative pace, through the race started to move up the field.  The early leaders began to fade away and Vermeesch followed by Iwayama moved into strategic spots to make the podium.

In the women’s race, Gooderham (GBR) added another medal to her already existing silver medal from the 100km Commonwealth Championship, winning in a time of 3:17:30. She was followed by last year’s winner Susan Harrison (GBR) who finished in 3:25:05. Gooderham and Harrison’s teammate, Joanna Zakrzewski completed the podium grabbing third in 3:26:37.

It was a chasing game between Gooderham and Harrison for the first quarter of the race. Then in the fourth lap of the ten lap course Gooderham made a courageous move to move past the returning champion and held her lead to set an outstanding course record. Zakrzewski ran a very steady race in only her second ultra run and finished strong behind Harrison.

There were 17 selection races held from Canada and France to Japan and Australia to select athletes for the World Trophy Final. The criteria for selection included a sub 3:20 (men) and sub 3:50 (women) run. The winners of the series races were automatically selected and following the preliminary selections the fastest finishers were invited until the selection pool was filled. In addition a few runners had invitations extended on the basis of their marathon times.

The next race on the IAU calendar is the 25th 100km World & European Championships on 10 September 2011.

Nadeem Khan for the IAAF