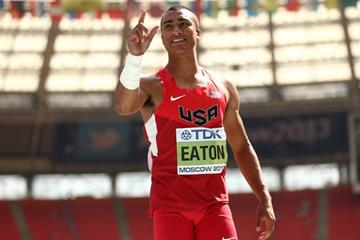 Statisticians A Lennart Julin and Mirko Jalava look back on the best combined events performances of the year with Julin covering the men’s events and Jalava the women’s.

Traditionally the decathlon very much lives by the Olympic rhythm with distinct statistical peaks at all levels every four years.

But 2013 didn’t fit into that mould. Olympic champion Ashton Eaton wasn’t quite on a par with his world record-breaking form of 2012, but even a slightly sub-par Eaton was capable of winning the IAAF World Championship by a handsome 139 points.

Germany’s injury prone Michael Schrader was finally fit for a major championships and had just as comfortable a margin (158 points) ahead of bronze medallist Damian Warner from Canada. But the really exciting element of the World Championships decathlon was the extraordinary strength in depth behind the podium trio.

Just 134 points separated places four to 13 (between 8446 and 8312). In comparison, just six athletes at the London Olympics scored higher than 8300, while 13 in Moscow did so. The seventh-place finisher in London scored 8283, which would have only been good enough for 14th place in Moscow.

It is also worth noticing that no less than 12 different nations were represented in the top 15 finishers at the World Championships.

It seems that the decathlon is entering a new and exciting historical phase where it is widening its recruitment base outside of North America and – mainly north eastern – Europe. And then there are youthful talents like Kevin Mayer and Gunnar Nixon and the likelihood of Eaton bringing the world record into unchartered territory over the coming years.

The women’s combined events season didn’t promise to be a good one as an unprecedented number of top heptathletes missed the season.

Briton Jessica Ennis-Hill won the Olympic title in London last season with 6955 when a score of 6576 by European champion Antoinette Nana Djimou was only enough for fifth place. Before the IAAF World Championships in Moscow, the best result by any of the entrants this year was only 6550 by USA’s Sharon Day.

But that did not mean the competition in Moscow was of a low standard. Perhaps because the competition was so wide open, many athletes saw Moscow as their chance to make it on to the podium. Whatever the reason, it resulted in a great competition where medals were not decided until the last event, the 800m.

Ukrainian Hanna Melnychenko enjoyed a consistent competition in Moscow and won her first outdoor major medal, grabbing the world title with a PB score of 6586. The 30-year-old had previously placed sixth at the 2009 World Championships and won the bronze medal in the pentathlon at the 2013 European Indoor Championships.

Canada’s 24-year-old Brianne Theisen-Eaton went to Moscow with high hopes and was not disappointed at her second World Championships. The former University of Oregon athlete bettered her previous personal best of 6440 by 110 points to win the silver medal with 6530.

The fight for the bronze was fierce in the last event and Dafne Schippers of the Netherlands showed just how much she wanted the medal. The 21-year-old only had an 800m PB of 2:15.52, but in Moscow she crossed the line in 2:08.62 for a score of 6477, taking the bronze medal with a national record.

The world-leading score of 6623 was set by Tatyana Chernova at the World University Games. The 2011 world champion appeared to be one of the favourites for the world titles, but after some mixed results at the Russian Championships in July, she drew her season to a premature end and missed out on competing in Moscow.