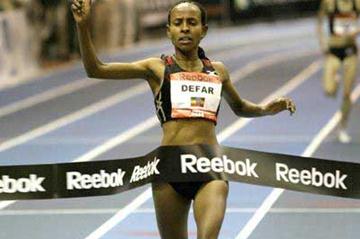 With an indoor 3000m World record of 8:23.72 and the outdoor World best at Two Miles, the indoor mark should have been a foregone conclusion for Defar. Indeed, she had the race well in hand from the start, following pacemaker Marina Muncan through a 2:53.0 first kilometre (less than two seconds slower than the pace of the 3000m) and then, when Muncan stepped off, steadily increasing the pace. Kim Smith of New Zealand, who had pursued Defar closely in the 3000m here last year, continued to track her this year.

Only after the second kilometre was passed in 5:44 (a 2:49) did Smith start to lose ground to Defar, but after giving up twenty or thirty metres Smith started closing the gap once again. The unofficial 3000m split of 8:35 for Defar was, again, only two seconds off Dibaba's winning 3000m mark.

At that point Defar had another lap to cover, and she only needed to run it in 42 seconds - 3:30 kilometre pace - to beat the previous World best of 9:23.38, set at this meet in 2002. Instead, Defar covered the last lap in 29 seconds (unofficially), putting a stop once and for all to Smith's attempts to catch up and chopping a healthy twelve seconds (plus fractions) off the old best.

"I'm not (even) running today at 100%," said Defar afterward, suggesting that she could have run even faster had she tried. Her winning time was 9:10.50.

It was an evening for half seconds as Craig Mottram knocked down a four-year-old American all-comer's record, running 7:34.50 in the 3000m. The previous record, 7:35.24 by Haile Gebrselassie, was also set at this meet, in 2004. Mottram also lowered his own Australian national record.

"Tonight was a bit more of a time trial," he said. "We wanted to run fast, and we did. Of course, the big thing is to win races, and I did that too."

"It was a good time, and I'm happy with it. I'm running as well as I've ever done, in about the same shape as I was this time last year. I just need to keep a lid on things, keep turning the screws, and keep getting ready for Beijing."

Mottram found himself shadowed early in the race by New Zealand's Commonwealth Games 1500m champion, Nick Willis, but Mottram's relentless pace proved too much for Willis over the full distance, as he faded badly in the last kilometre. "I like running the last few laps alone," joked Mottram. "Nick was clipping my heels early, so I kept pushing until he wasn't there any more."

Tirunesh and Ejegayehu Dibaba rewrote the season list for the women's 3000m as Tirunesh attempted to set the meet record at that distance. Tirunesh won in 8:33.38, but the record attempt was sunk by a lackluster second kilometre.

Dibaba explained afterward that the muscle cramps which nearly wrecked her 10,000m World Championship in Osaka had returned, despite three months of recovery in late 2007. "I think this is a very serious problem," Dibaba said afterward, "and I think it's getting worse. I've seen many doctors, and they say they have nothing."

Stuczynski and Cantwell rule the field

Jenn Stuczynski and Christian Cantwell, both current world leaders, won their respective events but did not improve their season-leading marks.

Stuczynski passed up to 4.50m in the Pole Vault, with only one other athlete still vaulting. She cleared that height on her first attempt, and 4.60 on her second, before setting the bar at 4.82, which would be a world leader and an American record (both marks Stuczyski currently holds).

"I came up short on the first two," Stuczynski explained later, and though the third was a good attempt, she thought, it wasn't a clearance, and the marks stand for at least another week.

Cantwell produced a 20.97m toss on his first of four attempts, and that proved to be the entire competition in the shot put, as both 2007 World Champion Reese Hoffa (20.70m) and 2005 World Champion Adam Nelson (19.86m) were unable to produce a better mark.

Heptathlon champion Carolina Klüft suffered an upset in the Long Jump. Her best mark of 6.34m was bettered by both Lela Nelson (6.50m) and Elva Goulbourne (6.40m). "I have no excuses," said Klüft. "I need to go back home and practice more." Klüft may have little chance to do so, as she has planned six competitions between Boston and the World Indoor Championships Pentathlon in Valencia on 7 and 8 March.

Mexico's Pablo Solares won the men's Mile in the very last stride, pipping Rob Myers 4:00.34 to 4:00.35. Solares, a fifth-year senior at Rice University in Texas, arrived in Boston through a relatively simple if unusual route: he emailed meet organizer Mark Wetmore, introduced himself, and asked if he could run.

The women's Mile was a minor upset, as current world leader Liliya Shobukhova was left in fourth (4:35.54) behind winner Jenelle Deatherage. Deatherage, a longtime bridesmaid among American milers, described her feelings about the win succinctly: "(It's) about time."

**NOTE – The IAAF does not recognise this distance for official World record purposes.