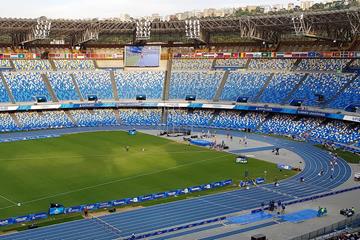 The San Paolo Stadium in Naples will host this year’s edition of the Golden Gala Pietro Mennea, the fifth leg of the Wanda Diamond League, due to take place on 28 May.

Rome’s Olympic Stadium, the traditional venue of the meeting, is undergoing renovation work ahead of the UEFA European Championships, so this year the world’s best track and field athletes will instead head to the San Paolo Stadium, which hosted the World University Games last year.

It will be the fourth time in its 40-year history that the meeting will not be held in Rome. The 1988 (Verona), 1989 (Pescara) and 1990 (Bologna) editions were all held in alternative venues.

It was initially intended that Milan would host this year’s Golden Gala Pietro Mennea, but constraints with the stadium – namely the lighting system, the expansion of the press stand, and the removal of large sections of the old railings surrounding the track – combined with the short time frame meant it wasn’t a viable option for this year.