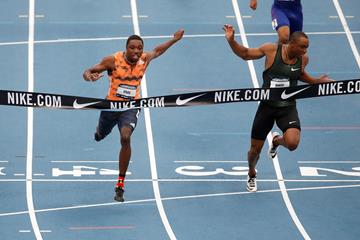 Organisers of the Meeting International Mohammed VI D'Athletisme de Rabat have assembled some mouth-watering clashes for the men’s 100m and women’s 200m at the IAAF Diamond League meeting in Rabat on 13 July.

The three fastest men of the year so far will take on the fastest man in history over 60m when Noah Lyles, Ronnie Baker, Mike Rodgers and Christian Coleman take to the 100m startline at the Complexe Sportif Prince Moulay Abdellah.

The quartet had been set to meet at last month’s US Championships, but Coleman withdrew before the event and Rodgers only contested the first round, clocking 9.89. It left Lyles and Baker to battle it out for victory with Lyles coming through to win in a world-leading PB of 9.88 from Baker’s 9.90.

Coleman set a world indoor 60m record of 6.34 earlier this year before going on to win the world indoor title. In his first outdoor race of the season, he clocked a wind-assisted 9.84 to finish second to Baker in Eugene. A slight injury has meant he had to take a break from competition, but the world 100m silver medallist will return to action in Rabat.

Ivory Coast’s Arthur Cisse, who clocked a national record of 9.94 last month, and British champion Reece Prescod, winner of the 100m at the IAAF Diamond League meeting in Shanghai, are also in the field.

The women’s 200m in Rabat will be just as enthralling.

Olympic 400m champion Shaunae Miller-Uibo is undefeated this year. She won the Commonwealth 200m title in 22.09 and improved her season’s best to 22.06 when winning in Shanghai. She also clocked a world-leading 49.52 to win the 400m at the IAAF Diamond League meeting in Eugene.

World and Olympic 200m bronze medallist Shericka Jackson has stepped down in distance this year and has proven herself against the best in the world over 200m. The Jamaican took silver at the Commonwealth Games earlier in the year with a PB of 22.18. She bettered that mark with 22.05 to win at the IAAF Diamond League meeting in Paris at the end of June.

Double world silver medallist Marie Josée Ta Lou of the Ivory Coast is undefeated this year at 100m. She will be looking for her second IAAF Diamond League win of the year at 200m, having won in Rome in 22.49.

Dina Asher-Smith has reduced her own British 100m record to 10.92 this year. The European champion will be contesting her first 200m race since taking bronze at the Commonwealth Games.

Jenna Prandini, who retained her US 200m title last month after clocking 22.22 in the semifinals, is also in the field.