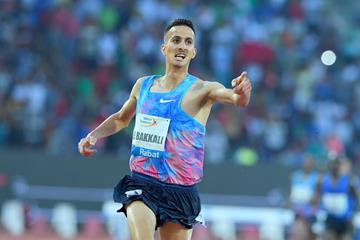 A slew of high profile head-to-head matches have been announced by organisers of the Meeting International Mohammed VI D'Athletisme de Rabat, the ninth meeting of the 2018 IAAF Diamond League, set for 13 July.

This first series of face-offs, dubbed 'In the sun of Rabat', feature clashes in the men's pole vault, javelin and 3000m steeplechase and in the women's high jump and 200m.

In the pole vault, 2012 Olympic champion and world record holder Renaud Lavillenie of France and Sam Kendricks of the US, the 2017 world champion, will renew their rivalry.

The men's javelin throw will feature German aces Johannes Vetter, the 2017 world champion, and Thomas Röhler, the 2016 Olympic champion, who have both thrown beyond 91 metres this season.

The steeplechase will be the meeting's biggest draw, featuring Morocco's Soufiane El Bakkali, the 2017 world silver medallist, taking on Kenyan Conseslus Kipruto, the 2017 world and 2016 Olympic champion. At a press conference in the Moroccan capital today, El Bakkali said he is determined to break the eight-minute barrier at the meeting. The 22-year-old, who thrilled the crowd with a victory in the event last year, has an 8:04.83 personal best set last year in Brussels.

The women's high jump features another clash between world champion Mariya Lasitskene and Mirela Demireva, the 2016 Olympic silver medallist. In the Stockholm leg of the Diamond League on 10 June, Lasitskene won her 42nd straight competition while Demireva topped 2.00m for the first time.

Another big women's duel will take place in the 200m between two of the world's top sprinters: 200m and 400m Diamond League champion Shaunae Miller-Uibo from the Bahamas and Marie -Josée Ta Lou from Ivory Coast, the 2017 world championships silver medallist in the 100 and 200m.

Another intriguing event is sure to be the women's 1000m, headlined by world and Olympic 800m champion Caster Semenya. The South African will be lining up for the distance for only the second time. In her first, she clocked 2:35.43 earlier this year in Pretoria.

Also announced was Moroccan star Abdelaati Iguider who will contest the 3000m.