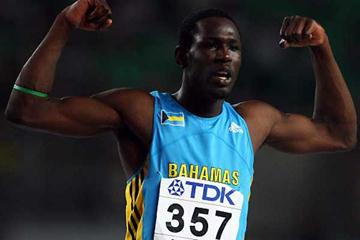 Donald Thomas is revelation of the year

Following his surprise win at the World Championships in Osaka and a World leading clearance of 2.35m, Bahamas’ Donald Thomas was presented with the Newcomer of the Year award at the World Athletics Gala in Monaco.

Extract from the IAAF 2007 Yearbook

When high jumper Donald Thomas touched back down to earth, moments after his 2.32m clearance that won the IAAF World Athletics Final in Stuttgart, one of the first hands offered in congratulation happened to be that of Javier Sotomayor.

"You’re the guy that can break my record," Sotomayor told him. "You have some special ability. I can see it happening. And sooner than you think. Maybe by the summer of 2008."

All that Thomas could do was smile at this ultimate praise, and laud Sotomayor as "a very nice guy, a real sportsman" for even hinting that his record may actually be in jeopardy.

"Yes, I can definitely see Donald going much higher in the future," said Jerry Clayton, his specialty jumps coach at Auburn University in Alabama, USA. "He just has to work on a few things. One, he’s got to lengthen his approach. And, two, he’s got to be more consistent over the bar. He’s got to get better position. Those final two to three steps are critical. Other than that, I think he has everything it takes."

Blessed with this kind of sensational "pop," Thomas’s potential has been recognized ever since his growing-up years in Freeport, on Grand Bahama Island. But basketball was his principal activity at the time and his abilities in that sport paved the way to a scholarship to small Lindenwood University in St. Charles, Missouri, USA.

He averaged over 16 points and 7 rebounds a game as a shooting guard for the Lindenwood team in the hoops sport but late in his senior year his life changed irrevocably.

A member of the Lindenwood track and field team dared him to an informal jump-off at 2.01m.

Amazingly, Thomas not only cleared that height but had the bar raised to 2.14 m and sailed over that, too, wearing heavy basketball sneakers, no less. Thomas remembers that day vividly.

"That was 19 January 2006," he told interviewer Brett Hess. "We ran over to the track coach’s office. On that (following) Saturday, I jumped 2.22m to win a meet at Eastern Illinois University.

"Hey, maybe I can do something in this high jump thing," he told himself.

And so he forgot about being "the next Michael Jordan" and a world athletics champion would be born. A top student at Lindenwood, Thomas gained a degree there carrying double majors of marketing and accounting and compiling a perfect grade-point average of 4.0.

With a single year of varsity eligibility remaining at Auburn University, under the rules of the National Collegeiate Athletic Association, Thomas took full advantage of that opportunity.

He won the gold medal at the NCAA Indoor Championships, placed third in the NCAA Outdoor Championships; took gold at the Southeastern Conference finals indoor and outdoors, and was voted the conference’s male track and field scholar-athlete of the year.

Salamanca and Osaka the highlights

Then it was off to the international circuit.

A 2.35m leap at Salamanca - scene of Sotomayor’s World record - was a major eye-opener on 4 July. And he’d repeat the 2.35m to win at Osaka. What grand theater this was.

First-attempt misses at 2.21m and 2.26m put Thomas’s hopes in early doubt and a desperation third-attempt success at 2.33m in no way seemed to predict ultimate victory. But he "hung in there" gamely, rallied to clear 2.35m on his first attempt, and this would prove the winner.

All three medalists would succeed at 2.35m, but for Russia’s Yaroslav Rybakov and Cyprus’s Kyriakos Ioannou it came at the second attempt, ultimately determining the 2-3 places. The three would fail at 2.37m. Understandably, the World Championships crown brought immense joy back to the 300,000-poopulation Bahamas island chain.

"When I got back home, we had parades on Grand Bahama, in Nassau, and in Eleuthera," said Thomas. "It was wonderful. Adults and little kids were out there cheering. I was treated like a big celebrity."

Presentation of the IAAF’s "Newcomer of the Year" award then provided the final icing on Donald Thomas’s 2007 cake.

Basketball shoes - as well as the sport of basketball - are now long into his past. But he’s still trying to discover his optimal footgear. All 2007, he’s been jumping in pole vault shoes.

"He’s probably busted up seven pair of them, too," said Clayton. "More pairs than that," said Thomas, laughing.

"My shoe company has been working on some special shoes for me. I need something to keep from turning my ankle. If I stay healthy and just continue working hard, I know good things will continue to happen. And better shoes will help a lot, too."

Elliott Denman for the IAAF