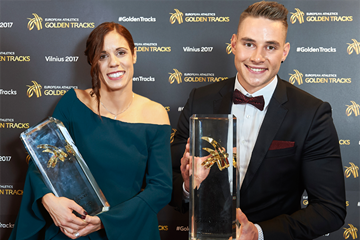 Vetter and Stefanidi crowned European Athletes of the Year

IAAF President Sebastian Coe and European Athletics President Svein Arne Hansen were among the guests at the awards ceremony.

In a year in which they were both crowned world champions, Vetter and Stefanidi also created their own piece of history in Vilnius. Vetter is the first German to be crowned male European Athlete of the Year while Stefanidi is the first Greek athlete – male or female – to lift the accolade.

Vetter, 24, soared to second on the world all-time javelin list with 94.44m in Lucerne before winning gold at the IAAF World Championships in London. World 200m champion Ramil Guliyev from Turkey and world decathlon champion Kevin Mayer from France were the two other athletes shortlisted for the men’s award.

European and Olympic champion Stefanidi, 27, asserted herself as the dominant force in pole vaulting again by winning the world title in London with a world-leading 4.91m, having also won gold at the European Indoor Championships earlier in the year. She was unbeaten outdoors in 2017 and ended the summer by winning the IAAF Diamond League title in Brussels.