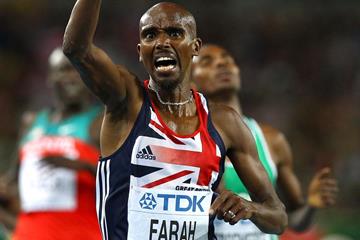 Farah and Savinova named European Athletes of the Year

- World champions Mo Farah of Great Britain and Russia's Mariya Savinova were named the 2011 European Athletes of the Year, European Athletics has announced.

The pinnacle of Farah's achievement in 2011 was, of course, winning the 5000m gold medal at the World Championships in Daegu, South Korea, but there were so many other outstanding moments for the European Athlete of the Year to savour.  The highlight of Savinova's splendid year, in which she only lost one of her 10 outings over 800m, was without doubt her gold medal run in Daegu when she claimed victory in 1:55.87.

The 28-year-old Farah started off his year by setting a European indoor record over 5000m in Birmingham in February, circling 25 laps of the National Indoor Arena in 13:10.60. He successfully defended his 3000m title at the European Athletics Indoor Championships in Paris in March.

Moving into the summer, Farah set a European 10,000m record of 26:46.57 when winning at the Diamond League meeting in Eugene, Oregon, in June and in July he ran a 2011 world-leading 5000m of 12:53.11 in Monaco, a time which ranked him second on the European all-time lists for the event as well as being a national record. However, all this was a prelude to his feats at the World Championships in Daegu.

He had to settle for the silver medal in the 10,000m – one of only two defeats in 14 competitions on all surfaces during 2011 – but bounced back to run a tactically perfect race in the 5000m to become the first European runner to win a global title at the event for nearly two decades.

Savinova, 26, became the fourth Russian woman - after her compatriots Irina Privalova, Svetlana Masterkova and Yelena Isinbayeva - to be honoured as the European Athletics Athlete of the Year.

Savinova's 1:55.87 performance in Daegu not only smashed her personal best by more than a second, it was also the fastest time by a European runner for almost nine years. Other big wins in 2011 included victories at the SPAR European Team Championships in Stockholm, where she helped Russia retain its place as Europe's top athletics nation, and the Samsung Diamond League final in Zurich.

Farah and Savinova will be recognized for their feats at the European Athletics Awards Night presented by MONDO on Saturday 15 October in Arona, Spain.

Storl stunned a field studded with Olympic champions, former World champions and medallists galore to claim gold at the World Championships in Daegu with a final-round shocker of 21.78m, a massive improvement on his 2010 personal best of 20.77m.

The young man from Chemnitz had indeed struck gold at the 2007 IAAF World Youth Championships in Ostrava then followed up a year later with the World junior gold in Bydgoszcz, Poland. He also won the European junior gold in Novi Sad in 2009 but nothing could predict the breakthrough he would enjoy this season.

He started the year with a silver medal at the European Athletics Indoor Championships in Paris and followed it up with the European under-23 title in Ostrava a few weeks before the World Championships. The manner in which he rose to the occasion in Daegu prompted world season leader Dylan Armstrong of Canada to label Storl “the future of shot putting for the next 10 years at least.”

Williams, the World junior 100m champion, burned up the track in the women's 100m final at the European Athletics Junior Championships in Tallinn in July to take gold in 11.18, a championships record by three hundredths of a second and a national junior record for the teenager. Just 24 hours after taking the 100m title, she powered to the 200m gold in a season's best 22.94. The 18-year-old capped the event by anchoring the Great Britain and NI 4x100m relay team to a bronze medal at the Kadriorg Stadium in the Estonian capital. Williams has already amassed an impressive collection of titles, including World youth, World junior and now a European junior title not won by a Briton since Sonia Lannaman 38 years ago.

Earlier this year, in March, Williams came agonisingly close to a surprise medal on her senior debut at the European Athletics Indoor Championships in Paris, finishing fourth in the 60 metres, just one hundredth of a second behind bronze medallist Ezinne Okparaebo of Norway.

European Athlete of the Year presented by MONDO final rankings: