The presentation took place at Olympic Club in the Olympic Park in Rio de Janeiro in recognition of their exemplary sportsmanship during the women’s 5000m heats on Tuesday.

Hamblin tripped and fell to the ground during the race, accidentally bringing D’Agostino down behind her with around 1800 metres to go.

D’Agostino was quick to get up again but instead of carrying on with her race she stopped to help the stricken Hamblin to her feet, encouraging her to join her in attempting to finish the race.

However, during her tumble, D’Agostino suffered an ankle injury, slowing the runner down, but Hamblin sportingly hung back for some time in return offer her encouragement before the US runner urged her to carry on without her.

Speaking after the ceremony, Hamblin said: “I think it’s very special for both Abbey and myself. I don’t think either of us woke up and thought that that was going to be our day, or our race, or our Olympic Games. Both of us are strong competitors and we wanted to go out there and do our best on the track.”

“I was on the ground for too long to get back up and catch on to the pack. So then it becomes about finishing the race, and finishing the race well. I am so grateful to Abbey for picking me up, and I think many people would have returned the favour. Once you are on the track, there is a mutual understanding of what it takes to get there,” added Hamblin.

El Moutawakel said: “The Olympic Games Rio 2016 have reminded all of us of the power and magic of sport. In the past weeks, the athletes have amazed us with their outstanding achievements and performances.

“We have seen new world records, we have seen high-level performances, we have seen personal bests and we have also seen great emotions. We have also been inspired by great moments of sportsmanship. Athletes are inspirational role models, and it is these moments of fair play that we have come together to celebrate today,” added the 1984 Olympic Games 400m hurdles champion.

IOC for the IAAF

BACK
Pages related to this articleAthletes
Nikki Hamblin 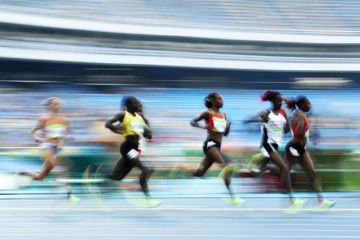