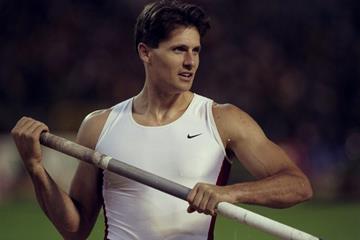 A unique sporting event will be taking place on Santa Barbara’s Leadbetter Beach June 19 and 20 - the $100,000 Beach Vault Challenge. The Challenge will consist of only one event, one of the most exciting events in the sport of track and field – the pole vault.

Hundreds of vaulters will compete over the two days. The runways and pits will be set up on the sand. Amateurs will be flinging themselves over the bar Saturday, and on Sunday (June 20), the best vaulters in the nation will  shoot for fame and fortune. A prize of US$100 000 is being offered to the first man who clears 20 feet (6.09m) and the first woman who clears 15 feet (4.57m).  Neither has been accomplished on U.S. soil.

Jeff Hartwig and Stacy Dragila feel they can reach the jackpot.

Hartwig holds the U.S. men’s outdoor record (19-8 ½ or 6.01m) and Dragila the women’s (14-7 ¼ or 4.45m). Both have committed themselves to jump in the beach event, which comes a week before the USA Track and Field Championships in Eugene, Oregon.

Hartwig will feel at home during the weekend of the colourful Solstice Parade. Besides throwing himself ridiculously far off the ground, he is known to be extremely fond of snakes. He and his wife share their home in Jonesboro, Ark. with 84 reptiles.

Women’s vaulting is a new endeavour - it will be contested in the Olympics for the first time next year (Sydney 2000) - but it has risen fast in popularity.

"People see it as a daring thing for a woman to try," said Dragila, a former heptathlete from Idaho. "It’s got speed and danger. People like to get out and see something crazy. The bar’s higher than a freeway overpass, and those guys are clearing that. Wow!"