After Tyson Gay's fireworks on Thursday evening, it was Carmelita Jeter's turn to burn up the track on Friday (26) in the women's 100m to highlight the second day’s action at the U.S. national championships in Eugene.

Jeter opened with a 10.72w in the semi-final round, the fastest mark in the last nine years, albeit with a 3.0m/s tailwind as Eugene's sunny but breezy weather continued.

Jeter then appeared poised to run away with the final as she burst from the field halfway down the track. A funny thing happened in the second half of that final, though, as Muna Lee hit her stride and gradually reeled Jeter in. There was little or nothing to distinguish between the two women at the finish line, and when the winner was finally announced, it was Jeter 10.78, then Lee, 10.78. (The times to thousandths of a second were 10.776 for Jeter, 10.777 for Lee; the wind was +3.3m/s.) Third place went to Lauryn Williams in 10.96, to earn her third consecutive trip to the World championships.

Jeter pulled up after crossing the finish line, grasping at her right hamstring, and hurried through the media/athlete mixed zone explaining that she needed to see her physiotherapist. "I cramped up at about the 70 meter mark," she said. "It was just a cramp, not a pull, so I'll be fine."

"I'm really excited to make the Worlds team. I didn't make the team last year and I wanted to get past that. It's a new year for me."

Muna Lee now holds the fastest ever non-winning 100m performance. "I've been wishing I could find my stride earlier in the race," Lee said a little ruefully.

The year of Michael Rodgers

It was anther close one in the men's 100m final with Michael Rodgers adding another to his now-lengthy string of wind-aided sub-10 clockings in that event. Rodgers took the early lead, but a closing charge by Darvis Patton brought Patton up to Rodgers' shoulder.

Rodgers maintained enough of a lead to win in 9.91 to Patton's 9.92, with a tailwind of 3.1m/s. Third place went to newcomer Monzavous Edwards in 10.00 even; all three will join Tyson Gay on the U.S. team for Berlin.

"This is my year," said Rodgers. "I came here with a lot of confidence. I think I can medal in Berlin if I work hard and stay humble. I have a lot of respect for [Usain Bolt and Tyson Gay] and I have to wait my turn like everyone else."

Patton was ebullient, saying, "I made the team, and I'm very satisfied right now. I thought I might creep up on him for a second, but the little joker held on."

Walter Dix, Olympic bronze medalist at 100 and 200m, failed to advance from the semi-final rounds of the 100m.

Goucher challenges her "fear of the kick"

Kara Goucher has already announced her plan to run the World championships Marathon in Berlin, after coming off her third-place finish in Boston this spring itching for another chance to prove herself. Here in Eugene she opted to defend her 5000m title, avoiding Thursday night's 10,000m final "so she wouldn't be tempted" to double.

Goucher ran in a big pack for most of the race, and when three-time Olympian Jen Rhines broke from the group with three laps remaining, Goucher covered the move immediately. With a bit more than a lap remaining, Goucher made a move of her own, running just under 66 seconds for the last 400m and running away from Rhines to win in 15:20.94.

"I was afraid of the kick in Boston, and it cost me," said Goucher, who stuck with the leaders in April's Marathon classic until the last half-mile. "I don't fear it now."

Rhines, second in 15:26.92, will lead the team to Berlin, with Goucher giving up her spot to concentrate on the marathon. NCAA champion Angela Bizzarri of Illinois was third in 15:33.02.

Matt Tegenkamp was fourth by the slimmest of margins in the 2007 World Championships 5000m, and here in Eugene he earned his chance to improve on that finish in Berlin. Tegenkamp took advantage of a crowded field to practice "championship racing," kicking past his teammate Chris Solinsky to win another national title in the 5000m in 13:20.57 with Solinsky just behind in 13:20.82. Another teammate of Tegenkamp's and Solinsky's, Evan Jager, was third in 13:22.18.

"I'm confident that I can finish in 53" for the final 400m, said Tegenkamp, "and we've been working on doing that off a faster and faster pace."

Malone over Rome and Waltz in men's Discus

Casey Malone spun the discus out to 64.99m to win that event over Jarred Rome (63.48m) and Ian Waltz (61.91m). Rome was the early leader at 63.03m, but Malone took over on the fourth round and Rome's final round improvement was not enough to overtake him. 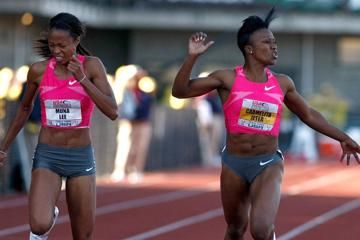