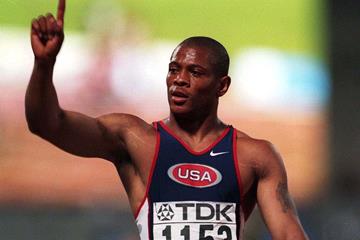 With the 60m world indoors record under his belt, Maurice Greene, the aptly nicknamed "Kansas Cannonball", has flown south to Australia, where he will be competing in Melbourne and Sydney next week.

Greene is accompanied by his coach, John Smith and his training partner Jon Drummond and has his sights on the 100m world record in the inaugural meeting of the 1998 IAAF Grand Prix Circuit (Melbourne Grand Prix II on 25 February).

Also running in Melbourne against world champion Greene and Jon Drummond will be Canada's Donovan Bailey, current holder of the 100m world record with his 1996 Olympic Final mark of 9.84.

Bailey is currently suffering from a minor back injury sustained whilst racing in New Zealand on Wednesday, but is expected to be back on form for the 25th and will be competing again in the interim in the Robin Tait Classic in Auckland on Friday.

Greene beat Bailey in the Athens World Championships, running 9.86 against Bailey's time of 9.91 and is planning to leave the 30-year old Canadian in his wake in Melbourne and put the shine back on American sprinting: "If I can go world record time in the 60, I definitely can do a world record time in the 100", said 23-year old Greene in Melbourne.

"The 60m record was just a lot of hard training. My coach John Smith and I set out on a mission in this indoor season and we accomplished it."

Greene has set himself a 100m target of under 9.80 and wants to become one of athletics' all-time greats: "I hope I'm the next superstar to come through for athletics."

If he achieves this dream - and his coach is the man who truly believes that our dreams are our only limits - he will likely pull Jon Drummond into stardom too.

The two young Americans have been a close team for all of the indoor season so far, linked by their training schedules and their religious beliefs, and Drummond's times too have shown major improvement over his performances last year.

Sean Wallace-Jones for the IAAF