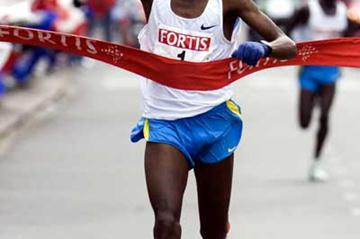 Rotterdam, The NetherlandsOn Friday 7 April, two days before the 26th edition of the Fortis Marathon Rotterdam, Kenyan Sammy Korir said during the official press conference, “I'm not that much of a talker. I let my legs talk.”

This morning (9) on a windy but sunny day the legs of the soft spoken Kenyan did talk, so loud that in the final kilometre the footsteps of his compatriots Paul Kiprop Kirui and Charles Kibiwott were not to be heard. Korir won today's race in 2:06:38, the fastest time of 2006 so far, leaving Kirui (2:06:44) and Kibiwott (2:06:52), both clocking personal bests, easily behind.

With ten athletes finishing within 2 hours and 11 minutes, the Rotterdam course again proved to be a very fast one.

The women’s race was won by Mindaye Gishu of Ethiopia, who clocked 2:28:30. Slovenian Helena Javornik, coming home second was the  only other woman home within 2.5 hours (2:29:37).

Sammy Korir, now 34 years of age, may perhaps have lost some of the speed which on 28 September 2003 made him the second fastest marathoner in the world (2:04:56) but he is still a clever and experienced runner.

A large group containing a big bunch of pacemakers set out at a very fast pace from the centre of the city, with the route lined with tens of thousand spectators. The vanguard was headed by Dutchman Koen Raymaekers who passed the 5km point in 14:50 and 10km in 29:54. Raymaekers' work was done then but the pace remained constant at three minutes per kilometre with the race passing 15 kms in 45:01.

Although the wind was sometimes directly in the faces of the athletes a group of 21 runners was still together at 15km.

After 30kms (1:30:00) Korir started pushing the pace, and after entering the Kralingse Bos (Kralingen Wood) four athletes were leading - Korir, from Kibiwott, Kirui and Birhanu - while Kipsang lost contact. At this most eastern part of the city, Rotterdam is over six metres below sea level and the runners used to have to climb up towards the finish but this year as part of significant course change by the organisers the runners took this road in the opposite direction on a downward slope on their way to the finish in the centre of the city.

The next to lose contact was the tall Ethiopian Birhanu, as the three Kenyans went on at an even higher pace seeking to better than the course record of 2:06:14 set by Felix Limo two years ago.

The three passed 40kms in 1:59:55 and at that moment it was clear who was the strongest, as then Korir chose his moment and accelerated away and won in 2:06:38.

Kibiwott tried to follow but could not, and Kirui fell back, though he came back in the final 200 metres to take second place ahead of Kibiwott who later complained about suffering from back pains.

Sammy Korir said afterwards he was happy with his victory: “Last year I had problems with injuries, now I am fine again. I felt strong and confident.”

Paul Kirui was happy with his personal best: “That was what I dreamed of,” whereas third placed Kibiwott confirmed “At 38 kilometres I felt pain in my back. I wanted to run under 2:08:00. I even went under 2:07:00. So I am a very happy man."

In the women’s race, four runners, Mindaye Gishu, Helena Javornik, Tegla Loroupe and Viktoria Klimina, were close together until halfway (1:13:25) but they were soon reduced to three as Klimina then fell back.

Loroupe, the former world’s fastest runner was the next to go, losing contact around 30 kms, while Gishu and Javornik carried on together passing 35kms in 2:02:48. It was after that that the Ethiopian broke away, winning in 2:28:30.

Wim Van Hemert for the IAAF