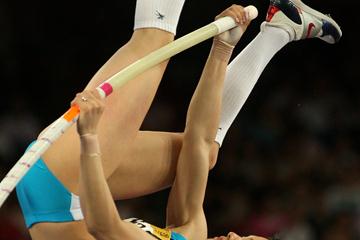 Pole vaulter Li Ling of China led her country to a victory march as the athletics programme of the 3rd Asian Indoor Games kicked of at the My Dinh Indoor Athletics Gymnasium in Hanoi, Vietnam on Saturday (31) evening.

The Chinese opened her account when other competitors in the fray bowed out at 4.00m. She cleared 4.45m to match her personal best (both outdoor and indoors) and collect the gold, but could not attempt to assault country-mate Zhang Yingning’s continental mark of 4.46m, set barely two years ago.

There were six finals on the cards for the opening day, five on the women's side of the programme. Yet another Chinese, Su Bingtian, took the only gold decided for men with his victory in the 60m. Bingtian celebrated his 20th birthday just two months ago. The uprising star already stamped his supremacy with a clean sweep at 100m earlier this year in Asian Grand Prix series. Tonight he posted a personal best of 6.65 secs to pip Saudi Arabian Yasir Alnashri at the post. Another excellent sprinter, Wachara Sondee of Thailand, replicated his third place finish from the last edition of the Games at Macau.

Bingtian has big plans for the near future as his native town Guangzhou is going to host the Asian Championships in the middle of November and the multi-sport continental Asian Games next year.

A ‘golden-glow’ by home sprinter

When Vu Thi Huong took the blocks in the women’s 60m finals, no one predicted a victory for her as she had a strong opposition in the name of Guzel Khubbieva of Uzbekistan.  Like Su Bingtian, Khubbieva had an unbeaten run at the Asian Grand Prix and to cap it all she had much better experience indoors than any other athletes who lined-up in Saturday’s final. But when the starter’s gun went up, Huong got out first and ran the race of her life and finished well ahead of Khubbieva, clocking 7.24.

The Vietnamese won a silver and bronze medal at the last Asian Championships outdoors at Amman, two years ago, in the 100m and 200m respectively, but had no experience indoors at all.  “I decided to run indoor, because it is a new challenge to me,” Huong revealed after the race.

When Tatsiana Ilyushchanka migrated to Iran less than two years ago, she received a Persian name of Leyla Rajabi. The former Belarussian had no opposition of worth in a field of eight athletes who assembled at the shot put ring and won with a 17.07m effort.