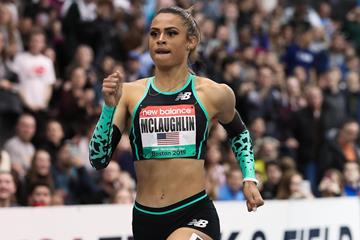 Sydney McLaughlin and Emma Coburn will return to the New Balance Indoor Grand Prix, the opening leg of the 2020 World Athletics Indoor Tour, in Boston on 25 January.

McLauglin, who'll be returning to the meeting for the third time, is coming off a stellar first season in the professional ranks that saw her win the silver medal over 400m hurdles and gold in the 4x400m relay at the World Athletics Championships Doha 2019. McLaughlin also won the Diamond League title and ended the season with a lifetime best of 52.22 for the 400m hurdles, making her the second-fastest woman in history. In Boston, McLaughlin will compete in the 500m.

Also returning to Boston with a medal from the World Athletics Championships is Emma Coburn, who will be making her sixth appearance. Coburn, won silver in the 3000m steeplechase in Doha, will line up in the two mile.

Great Britain’s top ranked men’s 1500m specialist, Jake Wightman, is also set to come back to the meeting. Wightman won bronze medals over 1500m at both the Commonwealth Games and European Championships in 2018, and finished fifth in the 1500m at the World Championships in a time of 3:31.87, a lifetime best and a new Scottish record. He will race in the 1000m in Boston.

Now in its 25th year, the New Balance Indoor Grand Prix has played host to nine world records and 13 US records.