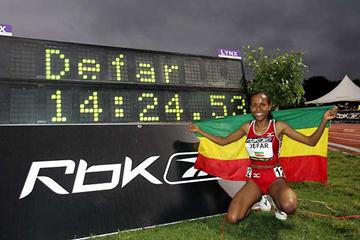 No uncertainties for Olympic champion

With a view of the Manhattan skyline from the stadium on Randall's Island in the East River, Defar was paced by Irina Vashchuk and U.S. miler Christin Wurth-Thomas. The conditions were overcast and cool, and barely a trace of rain after several showers before the meet; while the sprinters were grumbling about the cool temperatures, the distance runners thrived.

Wurth-Thomas led though 2000m in 5:47.7 (unofficially), and 3000m in 8:42.8, before sending Defar on her way. Defar maintained a steady pace of 70-second laps until she began picking up her turnover with two remaining.

At the bell, many observers thought the record attempt might be lost, but Defar had no such uncertainties. "I was very confident when I saw the one-lap-to-go split," she said afterward.

Defar credited another Ethiopian star with the confidence to make the record attempt. "I was in Hengelo with Haile Gebrselassie last week," she said. "He encouraged me; he said, 'Go to New York, and I know you can break the world record.”

"I was not sure I was going to make that time," said Chebii afterward. "Some of the guys were talking about the time yesterday, but I knew it would take a fast race."

The leaders passed the first 1000m mark in 2:34.11 before relaxing, and Chebii admitted, "Starting so fast sometimes is the end of the record." With 12:10.1 on the clock as the bell rang, Chebii delivered a 54-second last lap for the victory. "I work on my finishing speed," he admitted. "I think that is where the race is won, in the last 300m."

Justin Gatlin took the 100m in 9.87, yet another sub-9.90 clocking for the defending World and Olympic champion. While the cool and damp conditions might have been good for the distance runners, the sprinters found them less attractive.

"I'm a little beat up" from running consecutive sub-10s, Gatlin admitted. He plans to make this his last race before the U.S. championships in Indianapolis, three weeks from now, but announced that there he would renew his campaign to make the World record entirely his.

Marion Jones also looked back to the 1991 U.S. championships held on Randall's Island, pointing out that it was her first big meet at fifteen years of age. "It was the first time I'd run against Evelyn Ashford," she said.

Today, she won in 11.06 over Veronica Campbell (11.11), and while she was pleased with the result, she cautioned reporters against overplaying it. "I wouldn't say I'm back," she said. "But I'm very pleased to be able to compete against the best in the world and pull out a win." Jones expects significant competition in Indianapolis, particularly from Lauryn Williams, fifth here in 11.44. "It's a very tough field."

Wallace Spearmon took the men's 200m in 20.09 from Jamaica's Usain Bolt, 2nd in 20.25. "Coach told me it was a good first 100m," said Spearmon afterward. "I think that means I'm in trouble when I get home." Spearmon observed that Bolt would likely be stronger later in the season, but also pointed to his training partner, Tyson Gay, who ran 10.04 behind Gatlin, as one who might be even stronger later in the summer.

Bahrain’s Rashid Ramzi ran away with the Mile in 3:53.55, following a brisk early pace which strung out the field and left only Commonwealth Games medallists Nick Willis (NZL) and Mark Fountain (AUS) in contact with the World champion. When Fountain tumbled in front of Willis at the beginning of the final lap, Ramzi's victory was essentially sealed.

In a brilliant men’s Shot Put in which the top-3 all broke 21m, Christian Cantwell took the win with a release of 21.68m, from Dan Taylor (21.59m PB) and reigning World Indoor champion Reese Hoffa (21.05m). Vince Mosca, also impressed with a 20.66m best for fourth.