Beating world record holder David Rudisha to win this year’s Commonwealth Games 800m title was the hardest race of Nijel Amos’s life, the 20-year-old Botswanan athlete revealed on the eve of the 2014 World Athletics Gala in Monaco on Thursday (20).

Amos burst to prominence two years ago when, at just 18, he emerged from nowhere to win the world junior 800m title in Barcelona before going on to claim the London 2012 Olympic Games silver medal with a world junior record over two laps of the track behind the Kenyan’s world record-breaking run.

This season, he was first in the Diamond Race, added the African title and won the IAAF Continental Cup in Marrakech, while he also beat Rudisha at the IAAF Diamond League meeting in Monaco in the fastest time of the year.

However, Amos regards his finest race of the season as the Commonwealth final in Glasgow when he overcame the pressure of his country’s expectations to outkick Rudisha for the gold medal.

“The Glasgow final was the hardest of my life,” said Amos. “I couldn’t sleep the night before because of all the pressure. Everyone was saying: ‘It’s you against Rudisha’.

“At the Olympics, I was just a young boy and no one expected anything, but in Glasgow I was the big hope. But then I looked in Rudisha’s eyes and thought he is just another athlete and I can beat him.”

Amos took confidence from his Monaco win two weeks earlier when he’d run 1:42.45, second only to his London time in his personal top 10.

So how did it feel to be back in the same city four months later as one of 10 world athletes nominated for the men’s Athlete of the Year award?

“Yesterday when I flew in, I was so happy to come back to the city where I ran my second best time,” he said. “The track here is so fast and that race was like a repeat of the Olympic final.”

As for that final, Amos was asked to recall what it was like to be involved in a race many regard as one of the greatest ever seen.

“For me it was very special,” he said. “When I won the world junior title it was just six months after my grandmother died. I lost my mum when I was three and I never knew my father so I was raised by my grandmother.

“When I got to the Olympics it was the same. I knew Rudisha was in really top shape. In the call room before the race he told us he was going to cross [at 400m] in 49.2. He said to us young guys, ‘If you want to die, follow me. If not, then stay back.

“So I knew he was going to go fast and I thought if I can just follow him and stay in the race I could finish well.”

In fact, he finished in 1:41.73, putting him level with Sebastian Coe on the world all-time list, behind only Rudisha and Wilson Kipleter. What’s more, his time was more than six seconds quicker than his pre-2012 personal best.

But Amos had a less successful season in 2013, partly, he explained, due to his move last year to join a new training group in South Africa.

“I left high school in 2012,” he explained. “My coach had been my geography teacher but he didn’t have any qualifications (to coach). So I changed coach and moved to South Africa. It was difficult getting used to a new training group and coach.

“So 2013 was a year for me to find myself again. Watching the World Championships (in Moscow) I thought, I could have been there and done 1:44. That’s easy.

“So this year I thought I have to move out of my comfort zone. I went to my coach and told him I want to do more.”

Amos has been doing more than most young people from his country since an early age, a fact that he attributes to losing his mother so young.

“By 12 I already had a wide open mind. I wanted to chase my dreams and that made me grow up strong. I already knew no one was going to give me anything for free.”

Running wasn’t the young Amos’s only passion, however, for he also played football with his younger brother and cousins (he also has two older sisters), and still thinks of himself as a striker, as well as being a Chelsea fan.

He’s also a musician and has a single coming out with his band, ‘Black Brothers’, in time for the festive season, although don’t look for the name Nijel Amos when you search for it on YouTube. He calls himself DJ Zorro. 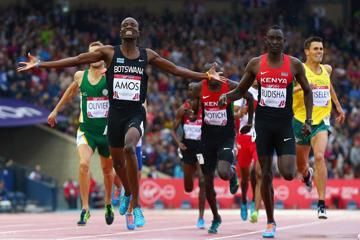 Amos defeats Rudisha over 800m at the Commonw... 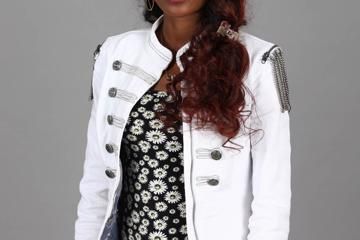 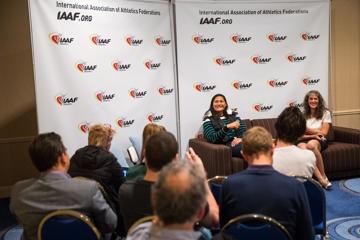