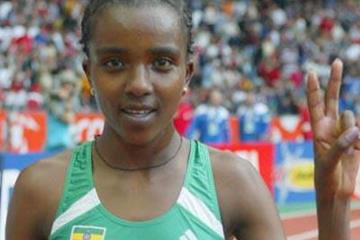 Multiple records were set in the women's 10000m. Not only was the winning time the third fastest in history, but the best-mark-for-places (fastest time for the given positions) were set for 2nd to 16th places. Eight runners broke 31 minutes barrier, surpassing the previous best of six in Sydney.

The race started fast. The opening 1000m split, 2:59.62, was the second fastest (the fastest is the 2002 European Champs race with 2:59.16) in history. Surging just before the 2000m, Sun Yingjie made a valiant attempt to win the race!  She had to take sting out of the kickers with a fast pace.

On the other hand, the women's 5000m was statistically a mediocre race at best. No records (in a wider context) were set, and Sun with stomach problem was not able to make the race. Memorable it was though on an emotional level, as Ethiopia's World junior record holder Tirunesh Dibaba defeated her senior colleagues with a brilliant 14:51.72 win.

The men's 10,000m was a beautiful spectacle. The records were set, and Haile Gebrselassie made a valiant attempt to win, albeit in a very unconventional way for him.

Hicham El Guerrouj won the last three World Championships 1500m. However, in both Sevilla and in Edmonton (and also in Sydney), he had his countryman pace the first part of the race to his advantage. Some wondered if he could win the "real" championships race anymore. In Paris, for the first time since the 1997 Worlds, he was the only Moroccan in the 1500m final, so he had to do all the work himself, and he won the race with great courage and style.

El Guerrouj was expected to go for the sustained drive, which is his strength. He did just that. With 900m to go he took the lead and stayed there for the rest of the race.  Later he confirmed "I intended to run the last 1000m hard."

The highly anticipated 5000m final did not disappoint anybody. Everyone did what they were supposed to do to win. Bekele started the race really fast. The opening 1000m was near record 2:31.94 (the record is 2:31.76 in 1993 Worlds). Although the pace slackened in the middle, El Guerrouj did what he had to do to win. He took the lead with 900m to go, as he did in the 1500m.  His attempt to take the sting out of the kickers had begun.

This resulted in the fastest ever closing 1000m, 2:24.33, in the global championships, surpassing the record 2:25.16 set in the 1983 at Helsinki. Unfortunately, for El Guerrouj, it was not fast enough; he was outkicked by Eluid Kipchoge.

Finally it should be noted that Yelena Zadorzhnaya challenged an even tougher double than El Guerrouj. She ran both the 1500m (8th) and 5000m (4th).

The 1500m was won by her compatriot Tatyana Tomashova in a championships record of 3:58.52, after Turkey’s heroine Süreyya Ayhan failed to break the will of the opposition in her usual style, leading to an impressive final assault from Tomashova.

However unlike El Guerrouj who was finished with the 1500m before attacking the 5000m, Zadorzhnaya had to go back and forth between 1500m and 5000m.  Even El Guerrouj admitted that "Running 5000m a day after the 1500m was tough, because of the different rhythm in the race."

In Stade de France, we have seen distance races that captured our imagination. Anybody fortunate enough to be in the stadium will remember them for a long time.