For the second consecutive season, Krisztián Pars of Hungary and Germany’s Betty Heidler survived a season-long battle to win the third edition of the IAAF Hammer Throw Challenge.

Pars, the Olympic champion, spun to victory in four of the series’ competitions to claim the title over Poland's Pawel Fajdek by nearly six metres. Fajdek, a distant ninth in the standings in 2011, took runner-up honours this year, propelled by second place finishes in Ostrava and Zagreb.

Heidler, the World record holder and Olympic bronze medallist in London, collected three victories in the series to prevail in the Challenge for the third successive year. The twice World championships silver medallist produced a winning margin of just over seven metres over perennial rival Anita Wlodarczyk of Poland.

Beginning in early May at the World Challenge meeting in Kawasaki, Japan, and ending in Rieti, Italy, in September, the third season of the IAAF Hammer Throw Challenge consisted of eight meetings with six scoring opportunities for men and five for women. In order to be ranked in the final overall standings, an athlete had to have participated in at least three events with only their best three results scoring for the ranking - scoring corresponded to the distance thrown - with the highest three scores deciding the overall men’s and women’s winners.

Pars, 30, picked up where he left off in 2011, a season in which he emerged as the most consistent thrower in the world. In 2012, he pieced together a season that left no doubt as to was the class of the event. Opening with four straight victories - including in Ostrava where he reached his 82.28m season's best - he encountered the only blemish on an otherwise impeccable season in Montreuil-sous-Bois, France, where he finished second to Fajdek. Pars then finished with victories in the remaining 11 competitions on his schedule to end the season with 15 wins in 16 meets and as Olympic and European champion.

His consistency showed with a 242.35m score in the series, well ahead of Fajdek who at 23 signalled that he may be a future force to reckon with. He threw 81.39m to beat Pars in the French meeting and while he fouled out in Olympic qualifying, he produced two other competitions beyond 80-metres, include in Ostrava (80.36m) where he finished second.

Finishing third with a 233.39m tally was 27-year-old Olexiy Sokyrskiyy of Ukraine, who finished second in the series stops in Madrid and Rieti. He notched a career best 78.91m in the Spanish capital and later finished fourth in the Olympics.

Heidler, 29, produced another busy but stellar season in which her only off day came at the European Championships where she failed to advance to the final. She nonetheless won 11 of her 14 competitions, took bronze at the fiercely competitive Olympic final where she reached 77.12m, and led the world with her 78.07m effort in the series stop in Ostrava, the second best throw of her career behind her 79.42m World record from 2011.

Heidler's 230.49m winning tally was comfortably ahead of Wlodarczyk's 223.13m, whose season was highlighted by victory at the European Championships and Olympic silver with a 77.60m season's best before collecting a win at the series-capping stop in Rieti.

Olympic champion Tatyana Lysenko of Russia was third, just over a metre behind the Pole with 222.05m. 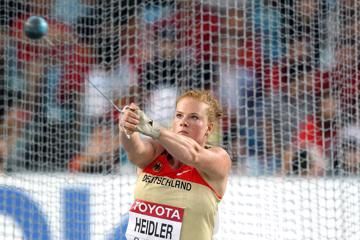 Heidler, Gatlin and Aman impress in Daegu – I... 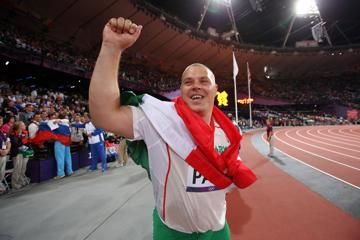