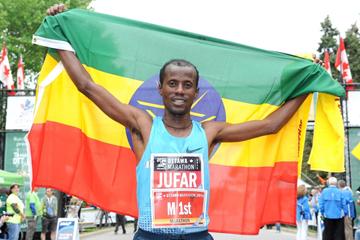 With the addition of Ethiopia’s Tariku Jufar to the 2014 Scotiabank Toronto Waterfront Marathon, organisers of the IAAF Silver Label Road Race on 19 October can proudly point to the fact that four men in the field have beaten 2:07 in the past three years.

Two of them have also gone faster than 2:06.

“Of course! If I break the course record I hope it will be as the winner,” said the 30-year-old Jufar. “I plan to run to my shape and if I win then I will be happy.”

Jufar has won several major marathons during his accomplished marathon career. Last year, he became the first Ethiopian man to win the Ottawa Marathon setting a then course record of 2:08:05. He also won the 2012 Beijing Marathon.

Most recently he finished fourth in the 2014 Seoul Marathon in a time of 2:07:02. Consistent training with an outstanding group of athletes at high altitude has obviously contributed to this success.

“I train under Coach Haji Adillo of ESMI (Elite Sports Management International) in Ethiopia,” he explained.

Like many of the elite Ethiopian marathon runners, Jufar benefits from daily training at high altitude sites just outside the country’s capital Addis Ababa. Training is all done at roughly 8000 feet above sea level with the training group numbering about 80 athletes.

“We arrive for training at 7:00am, and train and recover and stretch until 10:00am, then I eat and rest. In my free time I like to visit with friends and enjoy tea with my family,” added the affable Jufar.

“I come from Debre Zeyit which is known in Oromo as Bishoftu. It is known for the crater lakes there, it is a beautiful region. My family are farmers. Some of them are still living in Bishoftu. Farming and running have been my life.”

Jufar, of course, remembers a previous visit to Toronto in 2008 and not so fondly. He struggled to a 13th-place finish in 2:18:47 on that day. He has put that disappointment behind him with some pragmatic thinking.

“Honestly, I have been in the marathon for some years now and I learned that it is a very unpredictable event,” he said. “Sometimes it’s just not your day and the race gets away from you and you cannot control it. A 2:18 was not anything I ever expected from myself.

“But Toronto is a beautiful city and has very nice people. The water (along Lake Ontario) was nice too! “

A year after his last visit, Jufar was hit by a car while training in Addis. Some thought he would not run again but he proved the skeptics wrong with a series of meaningful results beginning with a time of 2:09:32 in Los Angeles, which was good enough for second place.

Considering he had missed out on training most of the year, he showed his immense talent.

The Toronto course has been slightly altered this year. Several twists and turns that were added out of necessity due to downtown construction projects last year have now been removed, and it is thought to be even faster.

Jufar knows he will have a tough time against the strong assembled field but, with a commitment from all of them and the right conditions, the course record could fall.

He’d like nothing more than to cross the line first with that record.