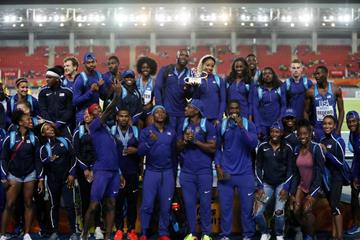 The US won five of the nine events over the two-day programme, took silver in a pair, and third in another to tally 60 points, 21 ahead of Jamaica who totalled 39.

The Golden Baton is awarded to the team who accrues the most points, based on the simple scoring system of eight points for first place down to one point for finishing eighth.

Australia was third with 24, edging Poland by just one point.

The USA won the men’s 4x800m, and men’s and women’s 4x400m on the final day, but for the vociferous crowd that gathered in Nassau’s Thomas A Robinson Stadium, the highlight was the resounding victory by a Bahamian quartet in the mixed 4x400m relay that capped the thoroughly entertaining evening.

Bahamian fireworks in the mixed 4x400m

National 400m record-holder Steven Gardiner, Olympic 400m champion Shaunae Miller-Uibo, Anthonique Strachan and Michael Mathieu teamed for a victory that electrified the crowd who left the stadium singing choruses of their national anthem. Gardiner and Miller-Uibo packed a strong 1-2 punch, building a sizable lead that was the foundation of their triumph. While Strachan was reeled in by Paul Dedewo of the US, she held her own, leaving Mathieu in a strong position as he embarked on the anchor leg. He hauled in USA anchor Claudia Francis midway through the final bend, again setting the crowd alight as he cruised towards the finish line. [report | results]

Even the rains that drenched Nassau throughout the morning, afternoon and into the evening cooperated as they finally relented soon after the evening’s first race, dropping an uncharacteristic veil of clouds, wind and a slight chill on the Bahamian capital.

But that hardly dampened the festivities and the evening’s slew of finals which began with a bitter battle in the men’s 4x800m, where Olympic bronze medallist Clayton Murphy secured the USA’s title defence after kicking away from Kenyan Ferguson Rotich, another 2016 Olympic finalist. [report | results]

Next up was the USA women’s 4x400m squad which confidently delivered the day’s most dominant performance, winning by nearly four seconds in 3:24.36. Poland packed a strong punch with anchor Justyna Swiety, who moved from fourth to second over the final 100 metres to narrowly edge Jamaica for silver. [report | results]

The men’s 4x400 was considerably closer with an inspired Botswana quartet coming just 0.15 shy of producing the evening's and weekend's biggest upset. It took the towering figure of USA’s LaShawn Merritt, one of the most decorated athletes on the track in Nassau this weekend, to hold off Karabo Sibanda, who at 18 already lists a fifth place Olympic finish on his resume. Neither will forget this evening’s homestretch battle when they next meet at the IAAF World Championships London 2017 in less than four months' time. [report | results]

Canada was the first to foil the USA’s drive for an unbeaten evening, prevailing in men’s 4x200m in 1:19.42 to at least partially make up for the disappointment of their disqualification in Saturday's 4x100m. The USA was second here and Jamaica third. [report | results]

The only event where the USA failed to score was in the women’s 4x100m where they were eliminated early after lead runner Tianna Bartoletta slipped and took a hard tumble to the track before even beginning her hand off. That paved the way for an inspired German squad to collect an upset victory as anchor Rebekka Haase fought off a Jamaican challenge for the second time in two-and-a-half hours. [report | results]

The IAAF/BTC World Relays will return to Nassau for its fourth edition in 2019.