Some of the world’s leading teenage athletes joined IAAF President Sebastian Coe and local dignitaries at the official pre-competition press conference on Tuesday (11), the eve of the IAAF World U18 Championships Nairobi 2017.

More than 800 athletes from 131 countries, as well as an athlete refugee team (ART), have assembled in the Kenyan capital for what will be the final edition of the global championships for athletes in the U18 age group. The championships will take place from 12-16 July.

“To have a World Championships here is very important. To the 800 athletes and 130 countries that are here, thank you. And, of course, I’d like to thank the organising committee in bringing this event to fruition.

“Being here is not a sacrifice; it is a labour of love to be witnessing athletics in a nation that has made such an extraordinary contribution to the history of our sport.”

Hosts are ready for the next level

Hassan Wario, the Cabinet Secretary of Kenya’s Ministry of Sports, Culture and the Arts, explained that the country has learned a lot in preparing for this event.

“I want to thank Seb Coe in having confidence in Kenya and giving us the chance to host this great competition,” said Wario. “This has been a huge learning curve for the country, and I think we are now ready for bigger things, having had this experience and having had this facility lifted to this level. We are now looking to the next level of events.

Jackson Tuwei, Chairman of the Local Organising Committee, welcomed several legendary Kenyan athletes to join him at the head of the room.

“It’s important for the athletes who are here this week to see where Kenya has come from,” said Tuwei. “This is where Kenya started. Now, we continue.”

Kevona Davis is the clear favourite at both of the girls' short sprint races, but when asked about her preferences, she did not hesitate.

“The 200m is my favourite event,” the Jamaican stated, “because I run better on the curve than on the straight.”

Hailing from the parish of Saint Mary, Davis's involvement in athletics began in primary school with participation in sports days. She is the first in her family to become a competitive athlete, but coming from a sprinting powerhouse nation, she does not have to look far to find inspiration.

“Shelly-Ann Fraser-Pryce has really inspired me,” she said. “I have met her, and she gave me advice, telling me first of all I must choose the right school. She also said I was a talented girl and I should not let anyone influence me in a negative way.”

Also present at the press conference was Kenyan hammer thrower Christabel Abuti. And she, too, can follow the good example set by a star from her country.

“[World javelin champion] Julius Yego has inspired me,” she said. “We now know a Kenyan can compete in throwing events and be successful. I am very proud to be competing in these championships in Kenya.”

Cuban long jumper Maikel Vidal tops the world U18 list with his recent PB of 7.85m, but he explained how he started out in the sprints.

“I started competing in track and field as a sprinter when I was seven years old,” he said. “I was scouted by the long jump school at Cuban Athletics and then started my career as a long jumper. Ever since moving to the long jump school I have concentrated on the event, even though I'm still very quick and could have competed in the sprints here. I'm very proud of my achievements in the long jump.”

French pole vaulter Matthias Orban owns the best mark this year among the entrants, so his goal for this week is pretty clear.

“My ambition here is to win the title, just like everyone else,” he said. “I also hope to improve my personal best by 10-15 centimetres.”

David Saruni, one of two Kenyan athletes hoping for a medal in the boys' 400m hurdles, is motivated by the host nation's rapid rise in the discipline.

“Kenya is known for the 3000m steeplechase, but we want to add another technical event,” he said. “Our athletes have done well at the IAAF World Championships, which inspired me to run the 400m hurdles.”

Saruni also spoke of his own ambitions and Kenya's hopes of topping the medals table after they finished second at the IAAF World U18 Championships Cali 2015.

“Individually I am well prepared to race, and I'm ready to bring Kenya a gold medal,” he said. “As a team we are well prepared physically. There is an expectation to claim the title, and it would be a privilege to be able to win the title as the hosts.”

Jon Mulkeen, Pawel Jackowski and Wesley Botton for the IAAF 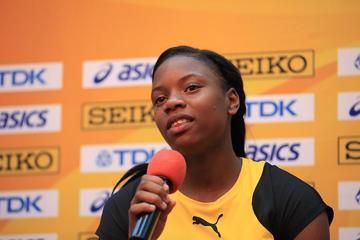