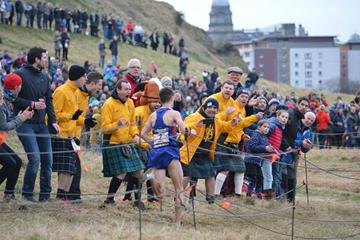 Winner chosen for fan photograph of the year

A winner has been selected in the IAAF’s contest for the best photograph of the year taken by a fan photographer.

The winning entry came from Katie Dunlop, whose photograph of Callum Hawkins at the Great Edinburgh X-Country caught the eye of the panellists.

“This is amazing, thank you so much to the IAAF and the judges; I’m a bit shocked!” said Dunlop, who has previously represented Scotland in the hammer. “I always enjoy watching the Great Edinburgh XC as it’s in my local park. Being so close to the action is great for taking photos and it helps to have such a stunning backdrop at Holyrood Park. The East Kilbride Tartan army are always out in force and I was lucky enough to spot them roaring on Callum Hawkins on his last lap.”

Panellist Patrick Smith was impressed by the emotion and action that was captured in Dunlop’s photo.

“Speaking on behalf of the three of us, the fan photo of the year was a pleasure to judge,” he said. “It shows fans are taking the time to come up with creative visuals even when at times their access isn’t the same as the professionals.

“It was a challenge in determining a winner, but in the end the winning image evoked an emotion with us all. It made us smile by showing that fans are indeed a strong part to athletics, showcased that IAAF events are cultural and happening around the globe, and reminded us that pictures don’t always have to be literal by displaying only an athlete in action.”

"Athletics is about passion, raw energy and determination," said IAAF President Sebastian Coe. "All these attributes are captured in the ‘best photograph of the year' taken by Katie, our fan photographer, from the enthusiastic support of the fans, to the drive of the mud stained legs of the runner powering across country. This photo illustrates the purest expression of athletics, mankind battling against terrain and the elements, our sport at its finest."