As the athletics family continues to grow with an expansion into new territories, 2021 will be a major milestone year for the sports of trail and mountain running with the inauguration of the IAAF World Trail and Mountain Running Championships, a result of a unique partnership between the IAAF, ITRA and WMRA.

At a joint press conference today ahead of the Ultra Trail du Mont Blanc (UTMB) in Chamonix, France, the International Trail Running Association (ITRA) and World Mountain Running Association (WMRA) announced that they would join athletics global governing body, marking the beginning of a new era for two of the largest running communities in the world.

IAAF President Sebastian Coe said: “Running is the most natural thing in the world and we want to encourage people around the world to run in whatever environment they most enjoy.

“As the global federation, it is our ambition to bring all runners together under one umbrella and this process will reach a significant milestone in 2021 when we will host the first combined IAAF Trail and Mountain Running World Championships. It is new and exciting territory for us, and we look forward to offering new opportunities for distance runners to compete in the spectacular settings and on the challenging courses that traditional mountain and trail events offer.”

Under the new agreement, the two organisations are officially becoming technical partners of the IAAF, and will work alongside the International Association of Ultrarunning (IAU), a consultancy partner, with the goal to develop, expand, promote and take trail and mountain running to another level across the world.

This is a unique partnership, bringing all the forms of running, one of the key elements of the sport of athletics, under one umbrella. The pinnacle of this partnership will be the new biennial IAAF World Trail and Mountain Running Championships which will be introduced in 2021. Currently both World Championships in trail and mountain running are held on an annual basis and organised by ITRA and WMRA.

Speaking on behalf of the mountain running community, WMRA President Jonathan Wyatt said: “We are excited to be part of a great initiative where we are able to bring the world’s top mountain and trail runners together at one event.

ITRA President Michel Poletti said: "Trail running is a booming discipline around the world that deserves international recognition for the elites who represent it. That's why the partnership project with the IAAF is a great step forward for our sport. It is a way to combine the expertise and skills of each and to share our own experience.

"The organisation of the IAAF World Trail and Mountain Running Championships with the WMRA also promises a bright future, where each discipline can assert its identity and raise the values we share: authenticity, respect and fair-play."

New Zealand's Ruth Croft, an elite trail runner, said: "(The new partnership) is a good thing because we want to be part of a race which will bring together all the top athletes once every two years. The new concept of the world championships was necessary to build the sport."

"It intrigues me to bring the best athletes together for the same race," Jim Walmsley, an elite trail from the US, added.

In the coming months, ITRA, WMRA and IAU will work closely with the IAAF on the details of the new combined biennial World Championships and the creation of biennial area championships which are also part of this new strategy to expand and bring the sports of trail and mountain running to new territories.

The International Association of Athletics Federations (IAAF) is the world governing and rule making body for the sports of athletics, which encompasses track and field, race walking, road, cross country, mountain, trail and ultra-running.

In 2012, the IAAF celebrated its centenary. Today boasting 214 national Member Federations, it has a global reach greater than that of the United Nations.

The IAAF World Athletics Series (WAS) is a global series of athletics competitions. It is topped by the biennial IAAF World Championships which was created in 1983, whose ten days of competition involve 2000 athletes from more than 200 countries, 3000 members of the media and are broadcast to over 200 territories worldwide to an accumulated global audience of 6 billion.

In 2015 trail running was included in the IAAF constitution as an official discipline. 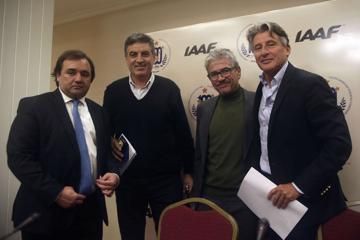