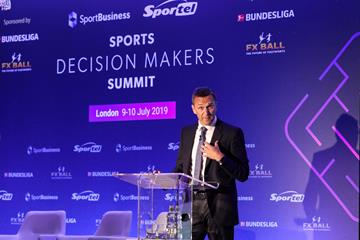 CEO Jon Ridgeon has committed the IAAF to doing its part to address a slide in global sports participation which is endangering the health of future generations and of organised sport.

In a keynote address to the Sports Decision Makers Summit in London on Wednesday (10), Ridgeon said he was shocked by some of the recent research on general sports participation among children and young people and declared that the IAAF was ideally placed to be part of the solution.

He said the latest evidence, which showed that 81 percent of adolescents aged between the ages of 11 and 17 fell below the World Health Organisation’s recommended minimum of physical activity to maintain good health, was a call to arms for all sports federations.

The WHO recommends that each person should do at least two and half hours of moderate activity a week (20 minutes a day), or 75 minutes of vigorous activity per week (ten minutes a day).

Ridgeon urged other sports organisations to join the IAAF in fighting for the future health of the global population.

“We need to come together, not compete against each other, to collectively campaign for sport,’’ he said.

Ridgeon acknowledged that sports would always compete with each other in the commercial marketplace, but said that “should not prevent us from coming together to make some fundamental changes in the lives of young people around the world.”

“For our part we at the IAAF are committed to campaigning to governments, cities and local authorities to get them to understand the problem we are facing, and to help to change the current decline in community health.

“I believe athletics is uniquely placed to make a difference. More people run than do any other sport on the plant. An estimated half a billion people around the world run regularly. Running, and walking, is accessible to almost anyone.’’

Ridgeon said the IAAF had begun to address this issue with the inclusion of mass participation opportunities in its World Athletics Series events and the creation of its global Run 24:1 campaign, which encourages people all over the world to run a mile on the same day to promote the joy of running.

“We also want to create a real legacy in the cities around the world that host our World Athletics Series events,’’ he said.

“We have already started staging mass participation events at our major championships, but we want to go further and get a commitment from host cities that they will create facilities and spaces for people to run and walk more, once our major events are over.

“We have a long way to go, but no city should ever stage any of our major events, or yours either, without creating a better sporting future for those communities.’’

Ridgeon, who has a background as both an elite athlete and a mass participation event promoter and organiser, said both strands of the sport were fundamental to its health and to the future relevance of athletics, and of sport in general.

He said that sport had “never been more relevant” to the world, and it needed to be mindful that it did not underestimate its wider importance while in pursuit of commercial success.

“If we only see sport as a product, then we are no different from washing powder, cereal or pencils,’’ he said.

He warned that without recognising the deeper emotional connection that people had to sport, and nurturing that connection, fan engagement programmes would ultimately ring hollow and leave sports vulnerable to ever-increasing competition for the global audience.

He said focusing on the health of the community and fostering that deep connection with sport was an investment in the future health and prosperity of sport.

“We need to help young people to develop a sport habit that will lead to a healthy lifestyle when they become adults,’’ he said.

“Unless this is solved, we may ultimately be fighting for fewer and fewer people who have any interest in sport.’’

Note: You can download the speech in its entirety here.